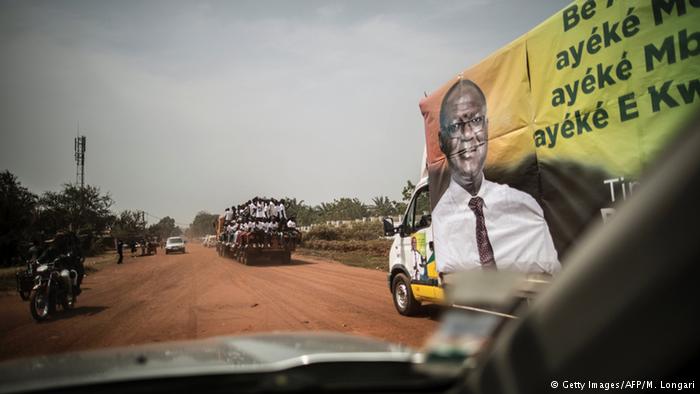 Central Africans choose a new president and parliament after having voted for a new constitution in a referendum earlier this month. It is a bid for democratic governance amid chronic sectarian violence.
Residents of the Central African Republic (CAR)have witnessed more coups than elections since their country gained independence from France in 1960. Sylvestre, a civil servant from the capital Bangui, hopes that change for the better is just around the corner. “It’s always the same here, the situation in the country has deteriorated badly. Right now we really do need progress, to elect somebody who can do some good for our country,” he said.

But with 30 candidates running for the presidency in Sunday’s (27.12.2015) elections, it is difficult to see who that somebody could be. The contents of their manifestoes are virtually unknown and this dearth of information is similar to that which beset the referendum earlier in the month. The electorate had to vote on a new constitution about which they knew very little. They voted for it nonetheless.

In spite of all the uncertainty surrounding the identity of the next president, there is one political figure who will not be taking the helm: ex-President Francois Bozize, who was ousted in a coup in 2013. The Constitutional Court has banned him from participating. Bozize, who grabbed power himself in a coup in 2003, believes the ruling was unfair.

“It was a shabby thing to do to somebody of my caliber,” Bozize told DW. He was president of the country for ten years. “These days nobody wants to have anything to do with me. I was simply dropped,” he said.

Tim Glawion, analyst at the German Institute of Global and Area Studies (GIGA) in Hamburg, believes the Constitutional Court’s decision not to let Bozize participate in the elections was both correct and courageous. “It was an interesting remark that Bozize made there. I think a number of his own citizens would describe his repressive regime as shabby,” Glawion told DW. The United Nations slapped sanctions on Bozize; he stands accused of having orchestrated brutal attacks on the Muslim community across the country by the Christian anti-Balaka militia after he was deposed.

Muslim rebels and Christian militia have been locked in conflict in CAR for the last three years. The Muslim rebels toppled Christian President Francois Bozize in March 2013 and there have been frequent attacks on both Muslims and Christians since that date. Around a quarter of the country’s 4.7 million inhabitants have been driven from their homes by this religiously motivated violence.

It’s not just Bozize who can’t take part in the poll. Members of the transitional authority and armed groups also aren’t allowed to stand in the elections. CAR has been governed by a Christian interim president, Catherine Samba-Panza, and a Muslim interim prime minister, Mahamat Kamoun, since January 2014. The transitional phase has to end sometime, said Susanne Stollreiter, who works for Germany’s Friedrich Ebert Foundation in neighboring Cameroon. “The Central African Republic is in a state of chaos and the one hope is that a properly elected government will be in a better position to restore order than a transitional authority which lacks democratic legitimacy and is exposed to pressure from the international community,” she said.

Stollreiter believes that Martin Ziguele from the social democrat MLPC party has the best chance of winning these elections. He was prime minister in the 1990s. Glawion agrees that Ziguele, a Christian, is the favorite. The favorite Muslim minority candidate is former minister Karim Meckasousa. Neither of these two are new faces, which is, however, just what many people in the Central African Republic are yearning for.

The election promises made by the candidates are very similar and revolve around peace, national reconstruction and economic growth. It is, however, extremely difficult to forecast the outcome of these elections. “We can’t use the last election in 2011 as a basis for projection because it was rigged. Nor can we draw on opinion polls for the simple reason that they don’t exist.” said Glawion.

There is the risk that the presidential elections could deflect voters’ attention away from the legislative elections which are being held at the same time. But the parliamentary elections promise to be an equally lively contest. Glawion believes the MLPC will garner many seats and that the former ruling party could stage a comeback, assuming that the elections are reasonably free and fair.

Glawion doesn’t believe that any one party has sufficient influence to rig the election, but voting could nonetheless be impaired by poor organization. It is unlikely that people will be able to go out and vote in the mainly Muslim northeast which is where the rebellion began three years ago. “The area is patrolled by militia who are against the elections and who will probably use force to stop them from taking place,” Glawion said. Numerous refugees also won’t be able to vote, he added. “This in itself is tantamount to manipulation of the vote on a huge scale.”

No election can be democratic without an election campaign prior to ballots being cast. One week before polling day, there were few signs of candidates trying to drum up votes outside the capital Bangui.

The African Union says preparations for polling day have been going well because 90 percent of the electorate have registered for the vote. But success in preparation does not necessarily lead to a successful election. Turnout for the referendum on the new constitution on December 13, 2015 was just 30 percent. The tense security situation in the country may have kept voters away from polling stations. There are around 900 French troops and UN blue helmets from the MINUSCA mission stationed in CAR to guarantee security. There were, however, reports of armed clashes while the referendum was in progress, despite their presence.

Some observers think it unwise to hold elections while the security situation is so precarious. Glawion disagrees. “I was never one to say ‘it’s too early, things will be better next year.’ A year ago one was saying the same thing and matters haven’t improved in the meantime,” he said.

Glawion also says one shouldn’t expect too much from these elections. If the country is to extricate itself from chaos, there must be reconciliation and public debate about the country’s future. In spite of all the difficulties and restrictions, the people of the Central African Republic will be able to take a first step along that path when they cast their ballots on Sunday. “The best case scenario would be an election that goes some way towards reflecting the wishes of the voters and in which all citizens believe that the newly elected parliament and president more or less represent them.”

Egyptians abroad begin voting in second round of parliamentary elections

Global terrorism in 2014: the most casualties ever