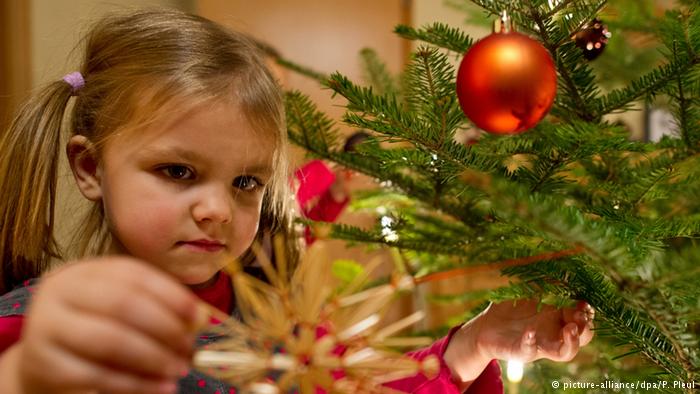 No matter what Germans may think of the Christian origins of Christmas, they cannot imagine the event without their beloved Christmas tree. But over time, that tree has undergone quite a bit of change.
Christmas – no other event dating back to ancient times continues to evoke as much emotion among Christians as the birth of Jesus, who is regarded as the son of God in the Christian faith. More than 2000 years after his birth, the high holiday of Christmas continues to be a crucial tradition in Christian communities worldwide.

The celebration of Christmas as we know it today has evolved over many centuries to a place whereby it is now inconceivable to celebrate Christmas without featuring its most recognized symbol: the Christmas tree. Historian and archaeologist Peter Knierriem says that it would be “highly unlikely” that people would ever do without the Christmas tree again.

“Not as long as mankind continues to exist “, Knierriem says. Knierriem is the head of the Museum Schloss Rochlitz in Saxony. Over the course of 20 years, he has conducted a great deal of research into the evolution of Christmas festivities. He is now presenting his findings in a special exhibition entitled: “Not really a silent night. Christmas – a journey through two millennia of festive cheer” (German Title: “Von wegen stille Nacht. Weihnachten – ein Streifzug durch zwei Jahrtausende Festkultur”).

He predicts that the tradition of having an ornate tree will manage to establish itself in non-Christian regions that have never had anything to do with Christmas as well. Based on the growing popularity of Christmas trees around the world, Knierriem says that the tradition is becoming symbolic of the change of seasons and dawn of a new year even in other countries.

His exhibit is scheduled to run through February 7, 2016, at the Osterzgebirgsmuseum Schloss Lauenstein, located about 40 kilometers South of Saxony’s capital Dresden.

The evolution of the Christmas tree

The way that Germans and many other European cultures celebrate Christmas these days is actually based on rather recent developments in historical terms, Peter Knierriem explains during an interview with DW.

He points out that the idea behind an ornate Christmas tree was first born in the early 15th century. Back then, city guilds across German-speaking states used to hang edible items on fir trees. Knierriem explains that these trees were moved around in street parades “accompanied by a lot of noise,” to show off the affluence of those cities ahead of the important Christian holiday.

Christmas festivities didn’t evolve much further until the early to mid 19th century, coinciding with the rise of the bourgeoisie and its rather philistine preferences in art during that time, known as the Biedermeier period. A wooden scaffold in the shape of a tree would be embellished to mark the advent of Christmas, using boxwood initially and later adding other kinds of tree branches as well. What was behind this custom was a desire to surround the home with evergreen branches, expressing the hope for new life heralded by Jesus’ birth while also trying to insulate houses against the cold and inhospitable temperatures during that time of the year.

It was not before the late 19th century that the tree of lights we know today finally started to make it into living rooms. Knierriem says that the tradition began in 1870 with the Franco-German War.

“At that time, King William, who later became Emperor, celebrated Germany’s victory over France under a Christmas tree in Versailles. If the King adheres to that custom, then it must be something worthwhile, the people said, thus following his example.”

From toy soldiers to tropical fruits

From that Christmas on, the tree became increasingly important in European Christmas celebrations, which until then had only been characterised by church rituals and not much else. Once the Christmas tree had conquered the living rooms of the bourgeoisie it also found its way into the homes of poorer people.

The First World War added to its further development, as Christmas trees were then decorated with nationalistic symbols, Peter Knierriem explains: “The entire arsenal of weaponry used in World War I came to serve as Christmas decorations in the form of glass pendants representing airplanes, grenades, mines or battleships.

Not long thereafter, the tradition of exchanging gifts also took off in the way that we know it today. Tanja Roos, a historian specialized in economic and social history says that it initially started on a modest level:

“Between 1900 and the start of World War II (1939), gifts for children were quite small – things like little homemade dolls and simple card games, as well as balls, books and wooden toys. Inspired by the events of World War I, war-themed toys such as tin soldiers or toy guns were added to the mix,” Roos explains.

Tanja Roos scrutinized many books of household accounts belonging to families in the city of Cologne, examining patterns of consumption around Christmas. Her work, based on those historical accounts spanning over a period of 60 years, resulted in a book on the history of Christmas traditions.

“Back then, the actual value of the Christmas gifts was fairly low,” she explains in an interview with DW.

“The more costly items among the gifts were household necessities, such as clothing. Sometimes people would splurge out on tropical fruits, which used to be hard to obtain back then.”

The Nazi revival of pagan traditions

When the Nazis rose to power soon thereafter their views and attitudes also began to influence Germany’s Christmas culture. They derailed existing Christmas traditions to abuse the holiday for their own ideological ends.

“The Nazi authorities wanted to rid Christmas of its Christian origins, as their own ideology could not be reconciled with the teachings of Christianity,” historian Peter Knierriem told DW, referring to such Christian values as charity and the love of God.

The Nazis tried to revive pagan Germanic customs instead. Christmas was to be replaced by what they called “Julfest” – the celebration of the winter solstice that used to be held across northern Europe in pagan times.

The Nazis accordingly referred to the Christmas tree as “Jultanne” – the “Jul” fir tree, while replacing Christian symbols – such as crosses and stars – with swastikas and Germanic sun wheels.

By 1943, the production of Christmas decorations had completely ceased in Germany. Misery and hunger were the predominant characteristics of the season at the height of the war.

“They still tried to use Christmas as a means of propaganda during the war, but many ordinary citizens, forced to hide out in bomb shelters, had probably reached their own conclusions by then on how the Nazi leadership was trying to mislead them.”

Historian Tanja Roos says that the last Christmas during the war was a rather drab event. By then, most items of daily use had become exceedingly difficult to obtain. People had to make the most of the holidays while relying on food substitutes. Coffee made from malted barley or artificial honey extracted from sugar cane had to suffice while people were struggling to survive. Gifts also mattered less than they once used to. Families were separated by consciption, war, and death.

But 70 years later, Christmas has long been restored to its glory days. It has become a celebration of peace once more, where families gather to sing songs and exchange gifts around the most christmassy of all Christmas symbols – the Christmas tree.

A Christmas star without a tail

How to make the perfect Christmas roast

Hanukkah, Christmas and Ramadan, celebrated together