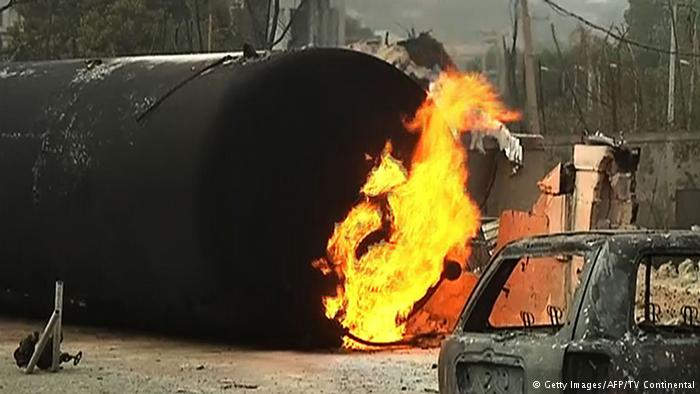 Nigeria’s president has responded to a fatal gas tank explosion – with the number of deaths still unclear. The Christmas Eve blast in the southern town of Nnewi may have been exacerbated by firefighters’ lack of water.
Death toll estimates from a Christmas Eve gas explosion in southern Nigeria are fluctuating wildly, with some reports claiming more than 100 dead, while other accounts suggest less than 10 people died.

The death toll may take weeks to sort out, as will the actual cause of the blast, but it seems apparent that it was a massive explosion, which may have been exacerbated by fire fighters’ shortage of water.

“About 300 meters from the gas line all the plants there were burnt, houses from 400 meters away were affected, heavy machines too,” he said, while visiting the Nnamdi Azikiwe University Teaching Hospital, where victims of the blast were being treated.

President Muhammadu Buhari, who put the death toll in the “tens,” issued a statement saying he was “greatly shaken and shocked by such large scale loss of human lives in a single industrial accident.”

But some officials, on both a national and a local level dismissed such high death counts.

“After the incident, six persons were confirmed dead outside the perimeter fencing of the company,” he said, adding that two others were found dead in a nearby building.

NEMA spokesman Eze put the death toll at four, barring any missing people who may have been burnt without any trace.

“The fire [was] so strong as to burn the bones into ashes,” he said, “but nobody has come forward with a missing person.”

Another source, Peter Kathy, the vice chairman of the Nigerian Red Cross in the state of Anambra, said many were injured.

“Medics are still battling to save the lives of those who suffered various injures in the blast,” he said.

The cause of the explosion also remains unclear.

By one account, a truck was off-loading butane cooking gas for customers stocking up on fuel for Christmas festivities. Others said it was set off when a leaking consignment of gas was being moved to the company dump.

Nnewi resident Ilochonwu Prince said, “the fire burnt them to ashes. They are just gone like that.”

He said no one knew what set off the explosion because “none of them that were there survived, now nobody has a good story of what actually happened.”