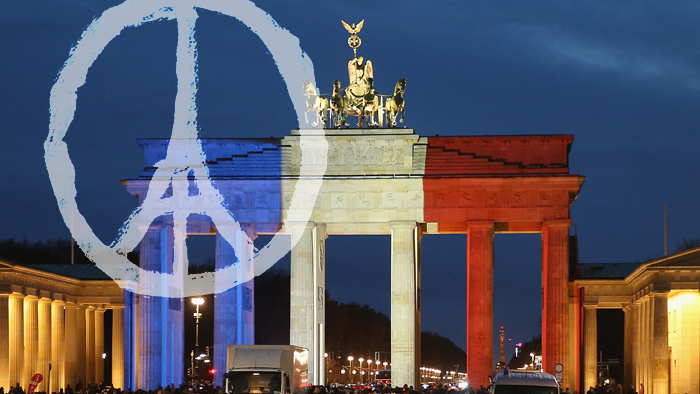 There are versatile connections between the two capitals. After the November 13 attacks, Marcel Fuerstenau experienced how valuable and moving they can be at a personal level.
I also heard the bang. “A fire cracker,” was my first thought. It sounded like something that explodes at every corner on New Year’s Eve in Germany. However, it was around nine-thirty in the evening of November 13 at the Stade de France in Paris – the soccer friendly between France and Germany. I watched the European classic in a pub in Berlin. The bang did not bother me. I’ve heard sounds like it at the Olympic Stadium in Berlin, home of the Bundesliga club Hertha BSC. In Berlin, like anywhere else, you will encounter madcaps who light torches or set off fire crackers.

My regular spot is the eastern part of the upper stand. The ones in the bottom stands are the die-hard fans. They have an inexhaustible supply of fan chants and rival put-downs. Sometimes they chant slogans like, “Pyrotechnics is not a crime,” as a response to the ban on flares, together with fireworks to boost spirits visually. Every now and then, they burn torches smuggled into the stadium. They’re dangerous, but they do look great. However, firecrackers exploding suddenly, are a stupid habit. Viewers are unnecessarily startled for a brief moment.

We were having guests from France

At first, it did not occur to me that a bomb had exploded in Paris on November 13. Only when the TV commentator hinted at possible attacks, I knew what the bang could mean. The terrible scale of the attacks became known later on. I stayed at the pub longer than I intended to and watched the live coverage from Paris. National players and functionaries in the catacombs of the Stade de France knew as much or as little as we did in distant Berlin. Anxious spectators flocked to the pitch.

Acting on my journalistic reflex, I dialed the colleague who was on call at this late hour in the evening. It was too soonfor an official response from the government. German Chancellor Angela Merkel had made her press appearance only on Saturday morning. Meanwhile, I was concerned about a completely different matter, which was nonetheless, by fate, related to the attacks: What would become of the concert, which was to take place at my church on the same day? My wife sings in the choir, which was hosting a choir from the Parisian suburb of Antony for the first time.

The guests were staying in private homes. We were hosting Anne and Francoise. At breakfast together on Saturday, the scale of the previous evening’s events slowly dawned on us. Canceling the concert would have been understandable but no one thought of it, despite our horror and bewilderment. Suddenly, I had the idea of reporting about this concert. Without the Paris attacks, the event would have been, at best, a story for the local press. For me, it was one of the most moving moments in my professional life after the fall of the Berlin wall. Despite my emotional involvement, I had to maintain a professional distance.

On Sunday, it was time to say goodbye to our new friends. Their plane left Berlin in the early evening and landed 880 kilometers away in Paris after one and a half hours. The choir from Antony returned to its traumatized home country. Before the plane’s departure, we visited the French Embassy at Pariser Platz together with Anne and Francoise. We stood in front of the sea of flowers in the pouring rain. Hundreds of people united in silent tribute. Strangers felt a closeness that can probably arise only in such moments of mourning.

In the days that followed, I received several emails from France – from our departed guests, but also from friends who live in Vitry-sur-Seine. Our older son had once spent six months as an exchange student in the Parisian suburb. We stayed in touch with his host family over the years. Last summer, we met for a hiking tour in the Pyrenees. And now the news: their son Adrien had wanted to go to the Paris concert club “Bataclan,” where the assassins shot 89 young people. Adrien did not get a ticket, as the show had sold out. During his half-year stay with us in 2009, we once drove to an AC/DC concert in Leipzig. “A bomb could have exploded there as well,” I thought now, influenced by the Paris attacks.

The degree of fear of terrorist attacks in Germany manifested itself in the cancelation of the international football match between Germany and the Netherlands on November 17 in Hannover. Four days later, Hertha BSC played against Hoffenheim in Berlin’s Olympic Stadium. Security checks at the entrances had been scaled up. Fortunately, people were laid back about it. There were 37,000 spectators for a match on a cold November day against the team at the bottom of the league table. There could not have been more spectators on a warm summer day – which was a good sign.

Before kick-off, a huge tricolor was rolled out on the lawn. The electronic advertisement banners on the sidelines and the video displays under the stadium roof lit up in blue, white and red. I have often experienced a minute’s silence here for deceased players and officials, but I will never forget the moment of silence for the victims of the Paris attacks. Absolute silence fell over the Olympic Stadium.

Eastern Europe is concerned about its own security