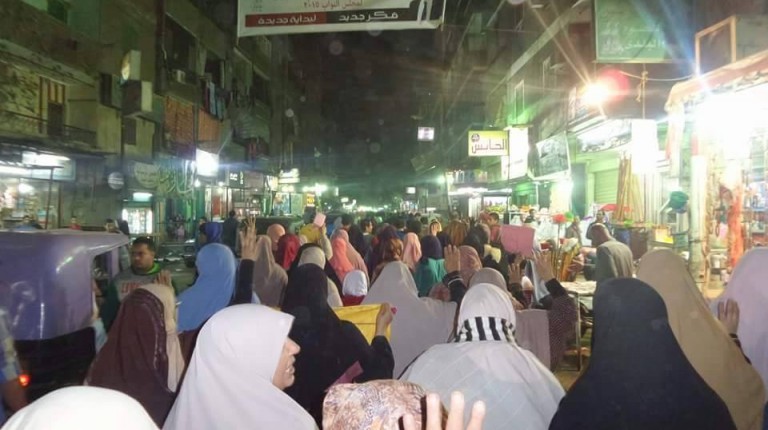 Minor anti-government protests in 15 governorates, including Cairo, Giza, and Alexandria, took place Friday as part of weekly demonstrations that are attempting to mobilise protestors ahead of the 25 January Revolution anniversary.

The Anti Coup Alliance (ACA), a bloc of parties supporting ousted former president Mohamed Morsi, has called upon its supporters to hold a new week of protests under the slogan: “Make the loser leave!”

A spokesperson for the Muslim Brotherhood said Saturday that the term loser “refers to all individuals of the current government who proved to be involved in crimes and major crises the country is witnessing now, including the return of [Hosni] Mubarak as a political figure and capitalists to the political scene.”

A demonstration in Sharqeya was dispersed by riot police, who fired tear gas and birdshot at the demonstrations who then retaliated by throwing fireworks in the direction of the police. Eyewitnesses in the protest told Daily News Egypt said that the Central Security Forces (CSF) arrested at least two protesters.

The Ministry of Interior said they cannot confirm or deny the arrests, but confirmed that clashes between “troops and members of the terrorist Brotherhood group took place”.

In Giza, the protesters called upon the government to resign, and demanded “the continuation of the revolution” and the “fall of the military regime”.

In Cairo, protesters demanded the release of female detainees who had been arrested for violation of the protest law and for putative membership in the outlawed Brotherhood group. According to different unofficial counts by revolutionary youth groups, more than 50 female detainees are imprisoned as political prisoners.

Since the ouster of Morsi in June 2013, affiliates, supporters, and critics of Egypt’s military regime have called the 30 June mass protests that aided his removal a “military coup”. Brotherhood supporters have taken localised political action to demand for the return of Morsi, whom they consider the legitimate president, to office.

The upcoming anniversary of the 25 January Revolution has stirred concern among the current government. On Friday, during a press conference in Sharqeya, Minister of Religious Endowments Mohamed Mokhtar Gomaa said calls to protest on 25 January are “destructive”, adding that the country currently needs stability and order.

In line with calls by the Egyptian state’s religious official entities to refrain from conflating political and religious matters, the statements were confirmed by the minister’s consultant Sabry Oubad who claimed that political dissent represents a singular focus on the country’s negative features and is against Islamic Sharia Law.

Last week, President Abdel Fattah Al-Sisi called for renewed support for his national security concerns and denounced calls for protests on 25 January, arguing that dissent will lead to further turmoil as evinced by the “regional instability due to the Arab Spring”.