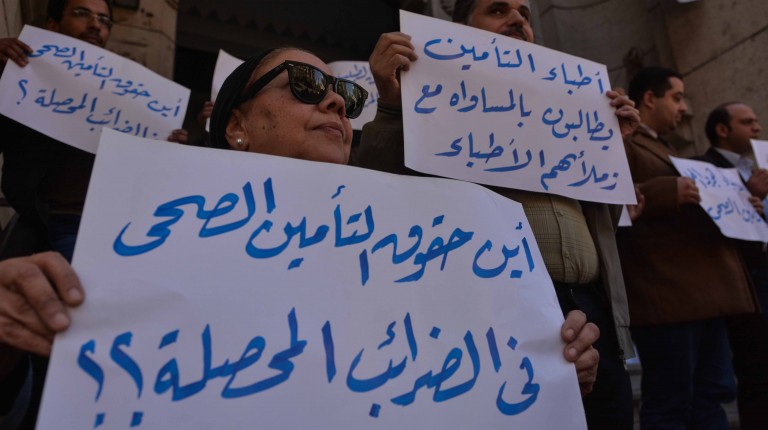 Secretary-General of the Doctors Syndicate Mona Mina has questioned the whereabouts of financial allocations intended for the health insurance ecosystem.  She estimates that revenue garnered from the cigarette tax, whose provisions provide a mechanism to support health insurance, amounts to EGP 8bn and claims none of it was paid to the health sector.

The Ministry of Finance has previously approved a suggestion made to allocate an amount of cigarette taxes to the health insurance sector, without increasing the price of cigarettes.

“Health insurance is falling out. We demand equality with the health ministry and it is not a factional demand,” the protest’s signs said.

According to the health insurance authority director’s previous statements, the cigarette tax has not been ratified until now and the decision is not in the authority’s hands but it is pending official ratification.

Mina demanded a meeting with the Ministry of Health to address the unallocated funds on her social media platform. He expressed support for the peaceful partial strike as long as it does not affect the emergency cases.

The Ministry of Health has drafted a new bill to revamp health insurance in Egypt. The bill, which awaits parliamentary review, aims to provide medical coverage for all citizens, especially low-income segments of the population. Additionally, the bill mandates the establishment of an independent authority that will control the quality and performance of hospitals.