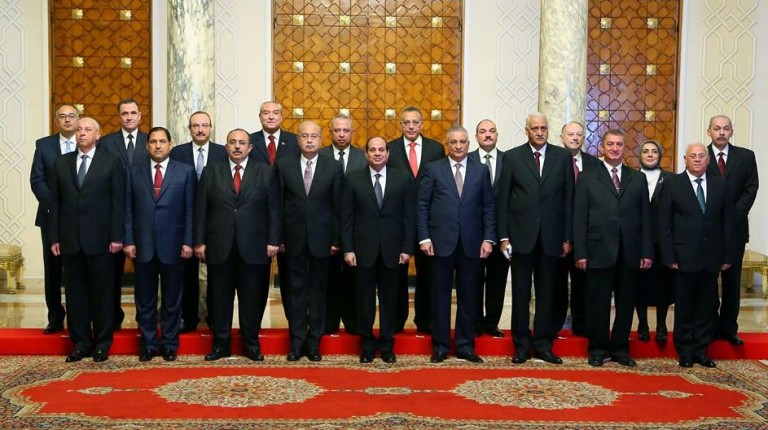 President Abdel-Fattah Al-Sisi appointed 11 new governors and five deputy ministers Saturday, most of whom have a military background.

The government reshuffle came a day after the sacking of the governor of Sharqeya, Reda Abdel Salam, who was appointed in February. There has not yet been an official explanation for the dismissal.

The 11 governor positions were formerly filled by five appointments with civilian backgrounds including Giza, Sharqeya, Kafr El-Sheikh, Qaliubiya, and Gharbeya.

None of the newly appointed governors were women.

Only two of the 11 new governors are civilians: engineer Sherif Abdel Aziz, who was appointed as Beni Suef Governor, while engineer Mohamed Abdel Zahar was moved from his position as Qaliubiya Governor to the position of Alexandria Governor.

Prime Minister Sherif Ismail accepted the resignation of governor of Alexandria Sherif El-Meseiry in October. The resignation came after waves of criticism following the flooding that left seven dead.

There have been no changes in the rest of the 16 governorates, including Cairo, which is presided over by Governor Galal Said, or the governors of North Sinai and South Sinai, Abdel Fattah Harhour and Khaled Fouda respectively, both of whom have military background.

The new governors were sworn into office before President Abdel Fattah Al-Sisi and Prime Minister Sherif Ismail at the Itihadiya palace. Minister of Local Development Ahmed Zaki Badr was among the attendees.

Al-Sisi welcomed the new governors and deputies and wished them success in their missions, according to a statement by the presidency spokesperson Alaa Youssef.

He stressed the importance of taking all necessary actions to improve living standards and protecting low-income citizens while achieving higher levels of transparency and fighting corruption, according to the statement.

He also called to increase awareness on the dangers of over-population and its effects on families and the state. Al-Sisi stressed on the importance of continuous communication between the governorates and ministries to reach the best outcomes.

Saturday’s reshuffle is Al-Sisi’s third in his tenure in office. The last reshuffle took place in February when 17 new governors, only two from the military ranks, were appointed.