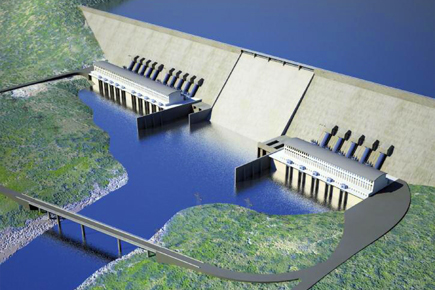 Ministers from the foreign and irrigation ministries of Egypt, Sudan, and Ethiopia will meet to discuss the Grand Ethiopian Renaissance Dam (GERD) on Sunday, after failing to meet in their previous meeting.

This meeting represents a new round of talks where the three sides hope to reach an agreement on the technical studies of the dam, which has been a source of conflict among the three countries.
The three sides are supposed to sign a document that supervises the results of the studies to ensure that they are complied with the Declaration of Principles signed by the presidents of the three countries in Khartoum in March. That document stated that no party would be negatively affected by the dam.

Egyptian Minister of Irrigation and Water Resources Hossam El-Din Moghazi said the next meeting aims to establish a convenient mechanism for the roadmap to implement the Declaration of Principles. It is related to the principles of supervising the beginning of building the dam and the technical studies’ path.

El-Moghazi said the meeting will handle Egypt’s concerns and fears regarding the consequences of the dam and it will end with the final version of the roadmap, whose sketch was agreed upon in Khartoum. If the three sides agree on the area of conflict, the meeting’s goal will be achieved.

After agreement, negotiations on technical talks will begin. El-Moghazi said negotiations are the only way to end the disagreements on the technical studies of the dam.

Meanwhile, an Egyptian Parliamentarian delegationو headed by former foreign minister Mohamed El-Oraby continues its in Sudan with the goal to tackle the dam issue.

The dam is estimated to be completed in 2017. It will be Africa’s largest hydroelectric power plant, with a storage capacity of 74bn cubic metres of water. Egypt has repeatedly expressed concerns that operating the dam on the Blue Nile will negatively affect Egypt’s water supply, while Ethiopia has always refuted these fears.