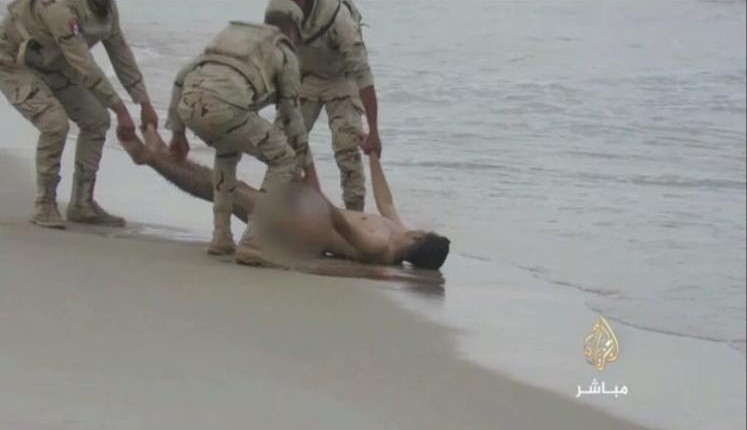 The Palestinian Ministry of Interior said Sunday that Egyptian soldiers killed a Palestinian man after he crossed the Egyptian-Palestinian naval boarder, west of Rafah on Friday.

“Regarding the execution of 28-year-old Ishak Hassan, no contact has occurred with the Egyptian security forces,” media reprehensive in the Palestinian Interior Ministry Bader Al-Den Bader told Daily News Egypt.

A video went viral online and through media outlets of a completely nude man running in the shallow waters of the Mediterranean Sea from the Palestinian border to the Egyptian side, trying to cross a barbed-wire fence before disappearing into the water. Subsequently he was shot at several times and was killed.

The victim was identified by Palestinian police as Ishak Khalil Hassan from the Gaza Strip.

When asked about Hassan’s mental state, Bader confirmed that “according to his family, he had serious mental problems”.

Palestinian Interior Ministry spokesperson Eiad Al-Bozum condemned the incident, describing it as “opposed to all law”. He called upon Egyptian officials to investigate the killing and refer the soldiers and officers responsible in the incident to trial. “The horrible footage of the mentally challenged Ishak Hassan getting killed by the Egyptian army shows the atrocity of the act,” he said.

Al-Bozum called Hassan’s death a murder, and particularly egregious as he was naked and unarmed.

No official statement has been issued by the Palestinian Embassy in Egypt.

A Palestinian diplomatic source, who preferred to remain anonymous, told Daily News Egypt that “until today [Sunday], no diplomatic contact between the two countries has occurred with respect to the killing of Hassan”.

“The army has no information yet about the incident. All the information is on social media but there is no confirmation,” the office of the Egyptian army spokesperson told Daily News Egypt.

The Egyptian Foreign ministry was not available for comment.

The death of Hassan sparked outrage on social media as a hashtag “Why was he killed?” circulated in Arabic. Users demonstrated anger at the Egyptian state, criticising its treatment of Palestinians.

One of Hassan’s cousins, Ahmed, told Al Jazeera news that he does not think “Hassan was fully aware or expecting that the Egyptian army would actually shoot at him”.

Relations between Egypt and Hamas have greatly deteriorated in the past two years particularly following the ousting of former president Mohamed Morsi in July 2013. The movement has been accused of interfering in Egypt’s internal affairs.

Hamas frequently denied these accusations. The tension reached its peak when the movement was designated as a “terrorist group” by an Egyptian court. The decision was later appealed and was cancelled by the State Lawsuit Authority.

The Egyptian army began establishing a “secure zone” along the Rafah border after a suicide bomber and an armed raid left at least 30 security personnel dead on 24 October 2014.

Hamas has been the ruling authority in Gaza Strip and Rafah border since 2007 when it won parliamentary elections, defeating the Fatah Party.