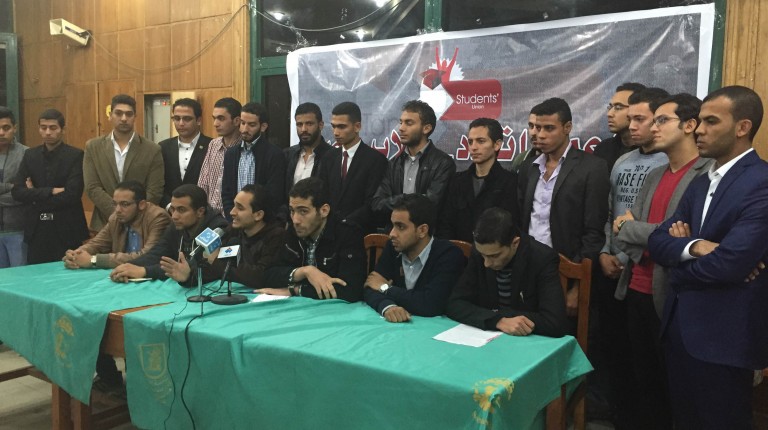 The Egyptian Student Union Federation emerged from internal meetings on Sunday to announce in a press conference that it welcomes negotiations with the Ministry of Higher Education to resolve the student union’s election crisis.

After the Ministry of Higher Education postponed ratification of the Student Union Federation’s election for two weeks, it decided on Thursday to vacate the results and call for a new round of voting. The ministry announced in an official statement on Saturday that they have referred the case to State Council.

“We refuse the supervising committee’s practices to use the appeal process against the unity of student movement,” said newly election federation president, Abdallah Anwar.

A tentative meeting between the Ministry of Higher Education and representatives from the Egyptian Student Union is scheduled for Thursday.

Following a vote among the elected union heads of each student body to elect a president of the general federation, a complaint was issued by Zagazig University’s new student union president claiming that the former union president had voted in his place.

“The supervising committee’s delay in ratifying the elections results for more than two weeks raises doubts of its intentions,” said Mohamed Salah, the head of the student union at Assiut University, during the press conference on Sunday.

Thursday’s decision to vacate the election provoked many angry responses from political parties and media figures. On Saturday, around 400 parliamentary, political, and media figures signed a petition to support the federation.

The petition called on President Abdel Fattah Al-Sisi and Prime Minister Sherif Ismail to immediately intervene and rescind the “chaotic” ministerial decision; additionally, the petition condemned the decision of the high electoral committee that directly presided over the election process.

According to Association of Freedom of Thought and Expression (AFTE), the decision to vacate election results only applied to the federation’s head and deputy; other board members will stay in their positions.

Further, AFTE claims that ministry’s decision was motivated by the election results divergence from the list supported by the Future of a Nation Party and endorsed by leaders in the Ministry of Higher Education, which failed to gain any seats.

“It is the election result itself that is causing a delay, as many dissidents took over the union’s most crucial seats,” AFTE said in a statement.

This was the first student union election after a two year interruption in regular elections. Since 2013, in the wake of the banning of the Muslim Brotherhood, universities witnessed major upheavals from students in different faculties who organised protests in support of the Brotherhood.

Protests often ended with violent dispersals and several injuries among both students and security forces, in addition to the random arrests and suspensions that followed.