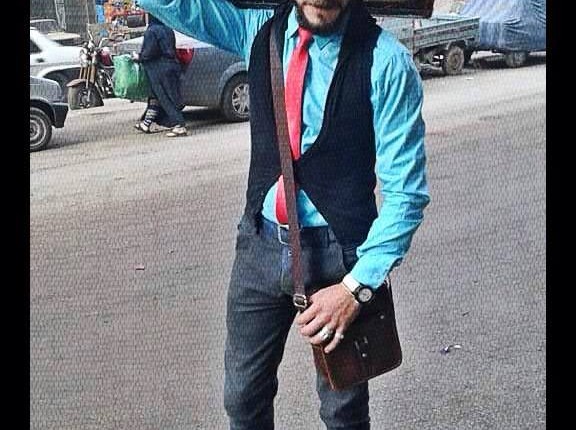 For the last two weeks, “Freska guy” – a university graduate who roams Cairo streets carrying a box full of the popular sweets called “Freska” – was the centre of attention of social media users.

With his unique fashion sense that does not align with the traditional perception of street hawkers, Freska guy, Youssef Al-Sayed Rady, attracted the attention of millions of Egyptians. Many considered him a good example of an ambitious and persistent young man who decided to challenge his life obstacles.

Because of the power of social media, Rady turned into a national hero within a few hours, and was interviewed by a number of TV shows and newspapers. This piqued the attention of a branch Notting Hill College in Egypt, which offered him a graduate scholarship in business administration.

After announcing the scholarship details on Facebook, even more people were motivated to congratulate Rady and share his story. They even started sharing his quotes as a source of inspiration to encourage youths who still cannot find a suitable job to launch any small project to earn a living.

Youths began writing about their intentions to emulate Rady and to continue struggling towards their wider goals.

However, things took a sudden and drastic change when an older video, in which Rady appears as a “Gandofly” (a seafood delicacy sold from street vendors to holiday goers) seller on Alexandria beaches, was posted on social media and went viral within minutes.

Thousands of people suddenly began insulting Rady, calling him an “actor” and claiming he deceived people. Some claimed he is supporting the government in its efforts to defer any responsibility for the high levels of unemployment onto the youth, and encouraging them to launch simple projects regardless of their ambition or field of specialisation.

Others however said there are millions of “Radys” around Egypt who did not find their way to fame, but he got lucky and was portrayed as a positive, successful example to the people. Others said even though he is not the first street vendor, he was the first to try hard and create a unique way of marketing his products, and that in itself is an indicator of creativity and success, rather than cheating people.

However, the case elicits one major question; does social media have this power to mobilise the public to adopt certain thoughts and feelings? Can it urge people to love or hate someone? Or is it all about the individuals themselves, who have the tendency to be easily affected by contradicting ideas? Why has social media become an arena to express anger and hatred, spread rumours, and judge people, instead of a platform for fruitful discussions and debate?

The Freska guy’s case is not the first one to prompt such a divisive stance between fierce supporters and opponents on social media.

A few months ago, the same phenomenon occurred with Somaya Tarek, a young woman who was harassed in a mall in Cairo. Social media was quick to make judgments when she appeared on “Sabaya El-Kheir”, a well-known Egyptian TV programme, after a video of her being physically assaulted by a man in a mall went viral.

After broadcasting her first interview on the programme, the public was sympathetic and advocated her cause. But when the programme presenter Reham Saeed revealed “scandalous” private photos of the girl, a large segment  of the public switched to fiercely attacking the girl on social media, and lost all sympathy for her issue. This was in spite of the major condemnations of Saeed’s actions by activists and media professionals.

Tarek said this turn of events and the ensuing attacks “ruined her life” and even prevented her from attending her classes at university.

In such cases, social media can be used as a weapon against sexual harassment, but the public instead turned it into a tool for condemnation.

Social media has started dictating people’s emotions. At first, when users saw Rady, their emotions were framed into loving for the young man fighting the tough circumstances that forced him to leave Alexandria to Cairo to make money. In Somaya Tarek’s, she went from being a champion for women against sexual harassment to bearing society’s proverbial scarlet letter.

In both cases, it appeared that herd mentality was the driving force behind the reactions of many social media users, leading the majority into feeling the same towards the same people.

“People tend to believe everything they hear on social media due to their ignorance and lack of information,” said Ayman Salah, a digital media consultant and e-marketing professor at Cairo University. “The face that it is easily delivered to people worldwide makes it easy for people to deliver the message they want to millions just by a click of a button, even if it is not true.”

Even though social media’s original aim was to be an engaging platform for everyone, it has fallen into delivering messages out of context, he continued. “The main purpose of pain killers was to erase pain but it turned into a form of addiction to some, turning its good purpose into a harmful one.”

People lack the ability to verify the truth beyond every post they see on social media before adopting a feeling or a point of view to defend, Salah concluded.