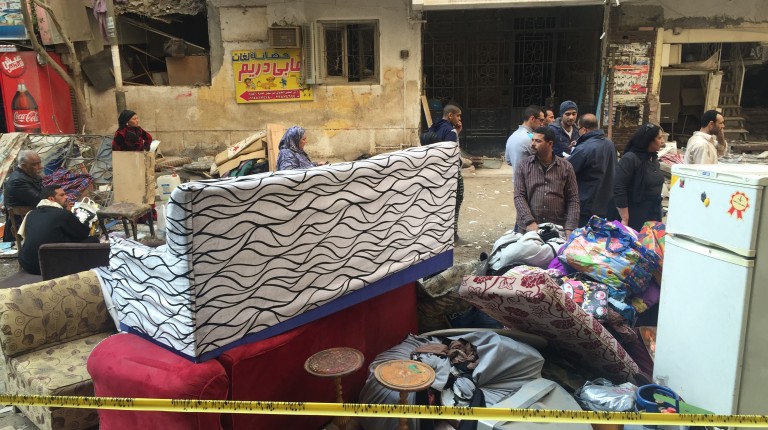 Devastation, fear, and uncertainty can be seen in the anguished faces of the residents of building number 22 in Sahl Hamza Street in the Faisal district of Giza, who feel abandoned by the government after their building was the site of an explosion Sunday, which left three people dead.

Thirteen other people were injured in the explosion, including two who are currently in critical condition. Several vehicles were also damaged.

According to the initial investigation announced by the Ministry of Interior, the building was involved in a gas-related explosion, which was caused by a butane gas leak. Most of the residents of the affected area however are convinced it was a terrorist attack.

Vice President of the Egyptian State Lawsuit Authority Rashwan Hussein Rashwan was among the casualties along with two other women, one of whom used to work as a nurse at the pediatrician’s clinic at the building’s ground floor.

The sound of the explosion echoed across the street at around 5pm, rattling windows and destroying doors. The residents of the affected building hurried out onto the streets, running in fear. In safety, they watched parts of their building collapse.

Amid the destruction that ensued, the source of the explosion remains unknown

Right in front of the building, the families of Mahmoud Qassem and Hamdy El-Sayed were sitting on a couch and three armchairs, surrounded by the rubble and the rest of their furniture and clothes that they managed to rescue, waiting for the unknown.

Qassem, who owns a flat on the third floor of the destroyed building, opposes the government’s version of the story and said it was definitely a terrorist attack.

“How can they know it was a gas-related explosion before the issuance of the results from the forensic lab?” he said.

Bomb detection dogs were present at the scene of the explosion to determine whether there were any explosive materials in the area. The preliminary scan of the area however showed no trace of explosive materials, according to the Ministry of Interior.

Qassem said that judge Rashwan, who died from injuries sustained in the explosion after being transported to Al-Haram Hospital, was the target of the attack.

“This is a continuation for the attacks against judiciary and the late judge was the target of the attack,” Qassem explained.

According to Egyptian State Lawsuit Authority spokesperson Sameh El-Sayed, the deceased judge had been working in Kuwait and was on a short vacation in Egypt.

The Giza governor had issued a decision Monday to demolish the building.

Qassem is critical about the governor’s demolition decision and that it will have negative effects on the investigations. “Demolishing the building will wipe the traces of the incident and they will not be able to reach the real reasons behind the explosion,” he said.

The wife of Hamdy El-Sayed, who looks to be in her mid-forties and is another apartment resident at the building, was cooking in the kitchen when the explosion took place.

“I heard the door getting slammed on the floor and the windows destroyed. If it was a gas leak, the cooker would have exploded causing a fire, but nothing happened. We did not even get the chance to turn the cooker off except an hour after the explosion,” El-Sayed’s wife said.

The government has not shied away from announcing previous terrorist attacks that has recently hit the capital. It seems that the explosions that have been hitting the country for the past two years have created a state of fear, in which people are suspicious of terrorist attacks even when the investigations showed no trace of explosive materials.

Many residents of building number 22 in Sahl Hamza Street feel as if the government has not been attentive to their plight. This is not however the first time the government has abandoned its promises to the victims of catastrophe. There have been several similar cases, the last of which was in August, when 40 families remained stranded for weeks after their building collapsed in Imbaba.

Despite the Giza Governor Mohamed Kamal Al-Daly announcing provision of temporary accommodation for the dwellers. Mahmoud Qassem, who spent his night on the street, however refuted the governor’s claim and said that the residents were not provided shelter.

The governorate also announced that it will provide an EGP 10,000 compensation for the family of the deceased and EGP 4,000 for those injured in the explosion. The residents however have yet to receive any compensation.

During the floods in Alexandria in October, several victims denied receiving the promised compensations announced by the government.

“Nobody provided us with accommodation. It was for the propaganda,” Qassem said while questioning the kind of accommodation they will be given. “These apartments will probably be far away in the slums: to hell with the apartments.”

Most of the building’s residents spent the night at the homes of their family members. They took what they could from their apartments and left.

The Giza governor’s decision to demolish the building is expected to take place once the families have been able to gather their furniture from the building. The current state of the building poses danger to the lives of the residents and is uninhabitable.

The governor had also announced that two buildings adjacent to the damaged building will be evacuated as well. The façade of the two buildings were partially destroyed. Residents however denied evacuation claims and asserted they did not leave.

The wife of Hamdy El-Sayed was concerned about what the future holds for her family. She was discussing the possibility of renting an apartment in a nearby street for her child, to be able to study for his upcoming mid-year exams.

El-Sayed’s family is also the owner of a beauty centre on the ground floor of the building. The shop was completely destroyed. The only sign indicating it existed was its blue banner hanging within the debris.

“Even if they provided us with an apartment, this will not solve the problem. Our source of income was destroyed,” said El-Sayed’s wife.

Furniture, piles of clothes, televisions, and even refrigerators currently lie in front of the damaged building, with the residents continuing to claim their belongings from their former home, yet to figure out a final destination.

In Pictures: A bomb explosion near a gas station in Faisal