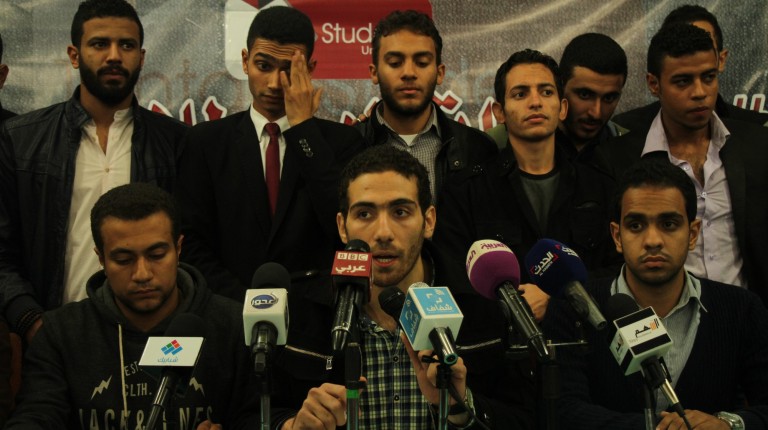 Renewed calls to support the Students Union (S­U) Federation’s elections emerged Monday, in a statement signed by 16 renowned local NGOs. They demanded the elections’ results to be officially ratified.

The NGOs condemned the Ministry of Higher Education’s interference with the student union’s affairs, claiming it had amended internal regulations by adding conditions “vaguely described” for the purpose of removing students who are politically active from representative positions.

“Students challenged general government intervention, which indeed do not push them further away from the elections, as thousands of them defended their rights in having real student’s representation. But it seems that the winners of the elections were unwanted icons for the authorities,” the statement read.

According to a copy of the statement published by the student-supporting NGO the Association of Freedom of Thought and Expression (AFTE), the official winners are Abdallah Anwar as President of Egypt’s Students’ Union (SU) and Amr El-Helw as Vice-President of the SU.

The committee’s stated reason for the annulment of election results was based on the “mistaken title” used by the vice-president of the SU of Zagazig University when he voted in the election for the Student Union Federation’s president.

However, the joint-statement issued by the NGOs contended the opposite, claiming that the committee had indeed doubted the eligibility of the Zagazig University vice-president and had not allowed him to cast his vote. However, upon obtaining confirmation from the university’s administration, the committee allowed the vote at the last minute.

The Egyptian Initiative for Personal Rights (EIPR), Al-Haqanya Law Centre, Nazra Feminine Studies, Al-Nadeem, AFTE, and 11 others described the situation as “a continuation of state crackdown on students in Egypt”, in their condemnatory statement issued Monday.

Among the regulations introduced by the Higher Education Ministry, there is a regulation that stipulates that a student who belongs to a “terrorist organisation” is disallowed from standing in student elections. This measure has resulted in the exclusion of hundreds of students.

“Moreover, SU president and their deputies in different universities across Egypt said they had been pressured by universities and by the ministry to vote for certain people,” the joint-statement read.

On Saturday, approximately 400 parliamentary, political, and media figures signed a petition to support the Student Union Federation board members who opposed a decision by the Ministry of Higher Education that vacated the results of the election of the federation’s board members and called for a new round of voting.

According to reports from several electronic news outlets, the Supreme Council for Armed Forces (SCAF) issued a new travel ban for Egyptian students studying inside the country who have secured postponed military conscription.

The news said the army will only allow those students to travel in narrowly delimited circumstances, including visiting a parent; making pilgrimage to Mecca, known as Umrah or the annual Hajj pilgrimage; travelling for medical treatment; or being invited to represent Egypt at an international conference.

The news on the students’ travel ban sparked several controversial reactions by human rights’ advocates who condemned such a decision. The copy of the decision was dated 7 December 2015.

Daily News Egypt contacted the military spokesperson’s media office. An official confirmed the issuance of the decision. However, he explained that these were not new measures, only a renewal of an existing regulation.

Usually, young male citizens are required to obtain several documents to be authorised to travel, including an official army exemption document issued shortly before the travelling date.