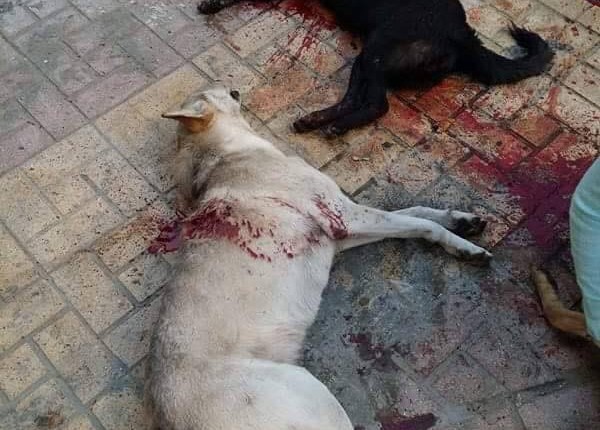 On Monday, the country woke up to several photos featuring stray dogs that were killed in several districts in Alexandria. The photos were widely circulated and sparked outrage and indignation among animals’ rights activists and regular citizens alike.

According to several eyewitnesses, a number of governmental employees began targeting stray dogs in a mass shooting in the Azarita and Sporting areas of Alexandira. The two upscale areas are home to many stray animals. However, on Sunday, the Directorate of Veterinary Medicine decided to put an end to this.

The official entity organised an armoured patrol to shoot any stray dog in sight. Moreover, when confronted by the neighbourhood’s community, the employees claimed the dogs were severely ill.

However, residents of both neighbourhoods shared old pictures of the dogs to rebuff the employees’ claims. Social media exploded with images of the dogs, both before and after the killing. Facebook users has been occupied with the topic, with Arabic hashtags such as “against killing Alexandria’s dogs”, “Azarita dogs”, and “Alexandria’s governor is a murderer” trending.

Other users narrate the full version of events, even describing the dogs’ reactions, and claiming that one of the dogs was pregnant and the employee insisted on killing her in spite of the witnesses’ objections. Other eyewitnesses relayed one resident’s reaction, claiming she stood between the employees and the dogs, saving two of them.

Many Facebook users highlighted the fact that the incident coincides with the new governor Mohamed Abd El-Zaher’s first day in office, who was appointed as governor on Saturday.

Abd El-Zaher however announced on the same day that he has yet to be informed of his new title and that he would remain in his current office until further notice. He was formerly the governor of Qalyubia.

Animal rights advocates in Egypt call for laws to be activated

Tortured alive or poisoned to death: The suffering of stray dogs in Egypt