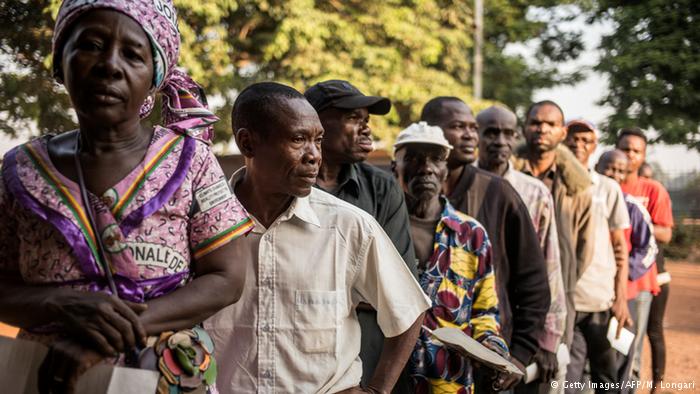 Voters in the Central African Republic are optimistic Wednesday’s (30.12.2015) poll will reunite a nation torn by sectarian strife. This is the third time elections are being held since independence from France in 1960.
The country has known only short lived stability owing to a string of coups dating back from 1965.

In March last year, Central Africa was plunged into a crisis after a coup by the mostly Muslim Seleka rebels.

After seizing power, some of the rebels went rogue and embarked on a campaign of killing, raping and looting.

The abuses prompted members of the Christian majority to form vigilante groups. They unleashed a wave of brutal revenge killings that left thousands dead. Close to a million people were displaced.

Wednesday’s vote, which includes legislative polls, follows a referendum on constitutional change that was backed by a majority 93 percent of voters.

The strong backing has been widely seen as a show of how much people long for peace and a return to normal life.

Leading candidates have vowed to reunite a nation torn and terrified by unprecedented sectarian strife.

Three men are tipped as front runners for the presidency in a race with 30 candidates. All are experienced politicians who held high-profile posts in previous governments.

The three candidates include 58 year old former Prime Minister Anicet Georges Dologuele who prides himself on having a clean past. He led efforts to fight theft and corruption during his time in office.

Another candidate is former prime minister contesting is Martin Ziguele who is running for the third time. He is considered the favorite of the country’s former colonial ruler, France.

Abdoul Karim Meckassoua, a Muslim, is also being tipped as a front runner. He served as foreign minister under military ruler General Francois Bozize.

At least 1,800 candidates want a place in the 105-seat National Assembly.

Almost two million people have registered to vote, out of an estimated population of 4.7 million.

Elections were postponed several times in the past two years due to violence and logistical problems. A second round is scheduled for January 2016, if no presidential candidate wins an outright majority.

The former French colony of Ubangi Shari became the Central African Republic after independence in 1960.

After three tumultuous decades of misrule, mostly by military governments, civilian rule was established in 1993 but lasted only a decade.

In March 2003 President Ange Felix Patasse was deposed in a military coup led by General Francois Bozize, who established a transitional government.

Elections held in 2005 affirmed General Bozize as president. He was re-elected in 2011 in an election widely viewed as flawed.

Several rebel groups joined forces in early December 2012 to launch a series of attacks that left them in control of numerous towns in the northern and central parts of the country.

The rebels fighting Bozize’s government participated in peace talks in early January 2013, which resulted in a coalition government that included rebel leaders.

In March 2013, the coalition government dissolved and the Seleka mostly Muslim seized the capital. President Bozize fled the country.

Rebel leader Michel Djotodia assumed the presidency and the following month established a National Transitional Council. He disbanded the Seleka in January 2014 but this fueled violence.

In January 2014, French trained lawyer and mayor of the capital, Bangui, Catherine Samba Panza, was elected by parliament to be the interim president.

Her transitional mandate expires in March 2016 and she was not eligible to run again.

Two other former presidents, Bozize and Djotodia, who are in exile and facing sanctions from the United Nations and the United States of America were barred from contesting.

Though rich in uranium, crude oil, gold, diamond reserves, timber and hydropower as well as huge quantities of arable land, Central Africa remains among the ten poorest countries in the world.