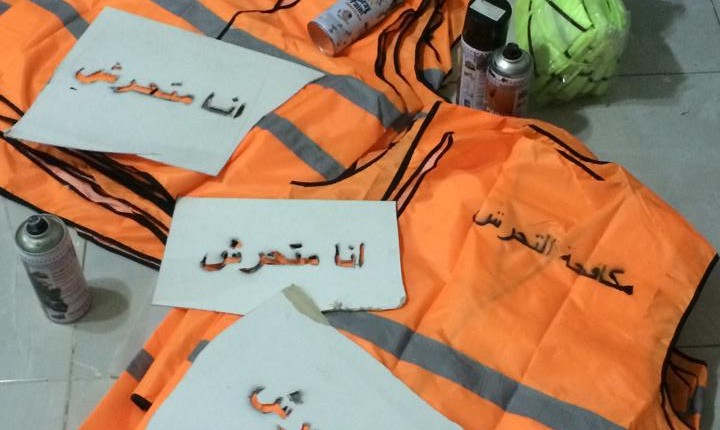 Amid the lack of security presence on the streets, a group of youths decided to sacrifice their national holidays and took on the role of the police, guarding females in the street.

The group of young men organised a campaign called “El-Tahrosh Bel Motahrshen” (Harass the Harassers) that aims to protect girls and women in Egypt from sexual harassment during the holidays, when the numbers and intensity of sexual harassment have reached their peak in Egypt over the past years.

The campaign was organised by two young men who wished to shed light on the phenomenon and highlight police negligence in stopping harassment.

Over 100 men volunteered in the campaign, including students and professionals, aged 16 to 27. Gaber Salah, known as “Jika”, a well-known activist who was killed in November 2012 on the first anniversary of the Mohamed Mahmoud clashes, joined the campaign in its first occurrence.

The campaign’s main goal was to catch harassers while they are attempting to commit harassment and spray the word “harasser” using a stencil and black spray on the back of their clothes to single them out and make an example of them.

The volunteers were present during the holidays, mostly in the downtown area, which is known to be the hotspot for celebrations. They divided themselves into groups and every group was responsible for monitoring harassers in certain districts.

Some females would join the male volunteers, but based on the campaign’s vision, the organisers only allowed three or four females in a group to prevent them from getting harmed.  The role of the females in the campaign was only to spray the message on the harassers’ backs, while accompanied with escorts to guard them.

“In 2012, many girls started to post complaints about harassment on the streets on social media. They expressed how they are terrified and that there was no cooperation from the police to protect them. And so my friends and I decided to do come up with an idea that can protect girls and put pressure on the police to confront sexual harassment,”  campaign coordinator Shady Abu Zaid said.

“The main motivation to launching the campaign was because every one of us has a female friends or relative who suffers majorly from sexual harassment on the streets,” Abu Zaid said.

The campaign started in 2012 but was suspended in 2015; the volunteers worked as harassment protectors for six Islamic public feasts but were not able to continue in 2015 due to the lack of cooperation from the police and restrictions on the campaign.

”Throughout our volunteering, we got used to police arrests and insults but last time we witnessed severe aggression from the police when seven of the volunteers, including me, were assaulted, arrested, and sent to Boulaq Al-Dakrour police station. They charged us with assaults on authorities and harassment, but we were released after a few hours,” Abu Zaid said.

“It was really depressing to end up as harassers after all our efforts and sacrifices to protect women and girls in feasts in the past three years. We then decided to suspend the initiative to protect ourselves from arrests, severe injuries, or death.”

The volunteers were not only subject to conflicts with police, but also with the harassers themselves since sometimes after they manage to catch a harasser and spray on his back, the harasser and his friends would return to fight with them, carrying melee weapons.

The campaign’s objective was to protect women and catch harassers without using violence.

On the campaign’s Facebook page, the organisers created the hashtag “Girls resisted harassment”, recalling success stories of women who fought back and stopped the harassers. They agreed to tell their stories publicly to encourage other women who fear societal judgment to overcome their fears and respond to the harassers.

Volunteers did not only work to protect women, but also monitored harassment cases in downtown areas regularly during the holidays. On one day, they monitored more than 40 cases and report the status of security presence to media sources and on social media.

“We called several times for a security presence in the streets to deal with harassment. We never aimed to organise the campaign to be an alternative for the police. People’s safety is the police’s duty, not ours, and our initiative was only an attempt to protect women from any unexpected harms,” Abu Zaid said.

The great number of harassers the campaign caught reveals that in Egypt, there is a large rate of ignorance among all social classes.

Ghaydaa Sabry, a young woman who works as freelancer filmmaker, joined the Harass the Harassers campaign for four holidays and launched another anti-sexual harassment campaign called Aman (Safety) in 2012.

The Safety campaign is organised to teach girls and women different self-defence techniques through various strength-training exercises to enable them to deal with any violence in the streets, whether weapons attacks, theft, or kidnapping.

The coaches give the self defence practice in an academy located in downtown Cairo with simple fees to pay the rent. The coaches work on a volunteer basis.

The self defence classes also provide psychological support for women, Sabry said, noting that several young women have succeeded in overcoming their insecurities and have gotten stronger because of the classes.

Regarding Sabry’s participation in the campaign, she said: “I was not satisfied with women’s response to harassment. I spoke with the academy coaches to designate times to teach them how to protect themselves, since the police are not present to help them.”

“I joined Harass the Harassers because it is not a men’s issue but the issue of every girl and woman in Egypt. The best part was when I sprayed the backs of harassers – it was like taking revenge,” she said.

The police are still not actively dealing with the phenomenon, nor is the harassment law effective enough to combat it, since any harasser can be released on a bail of EGP 100.

According to a 2008 Egyptian Centre for Women’s Rights (ECWR) survey, 98% of foreign women and 83% of Egyptian women have been sexually harassed in Egypt.