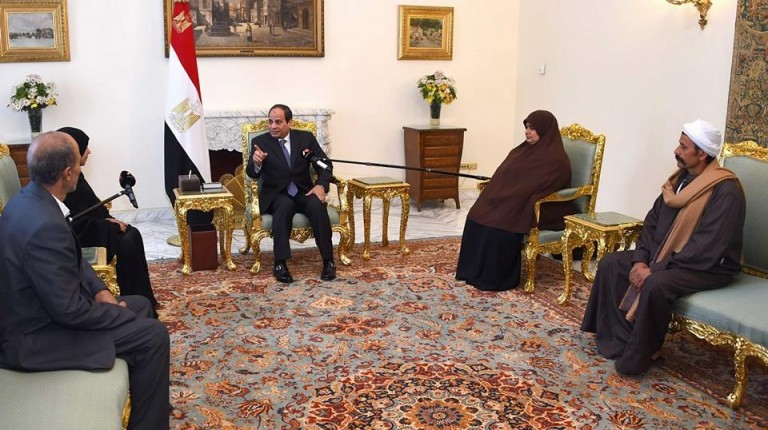 Mohamed Ayman was an armed forces conscript who was killed on 15 December in an area called Zarea Al-Kheir, west of Al-Arish city. He was part of a team of forces conducting raids and when he spotted a terrorist about to detonate an explosive belt; he rushed to hold the man close, who then blew himself up.

“My son was soon to turn 21. But thank God for everything,” his father told Daily News Egypt. The father is bravely embracing his family’s pain because he does not consider his son’s death as a loss as; rather he thinks of it as a sacrifice offered by the family to Egypt.

He was the only victim of the attack, sacrificing his life and reportedly saving eight colleagues.

Mohamed Ayman was born in 1995 and raised in the small town of Kafr Saad in the governorate of Damietta, along with his two younger brothers.

President Abdel Fattah Al-Sisi had personally met Ayman’s parents on 18 December to express his gratitude to their son, saying he has done something much more meaningful than defending his military location.

“I cannot offer you condolences but I must, on the contrary, honour you. Your son shall never be forgotten for defending us, the people, so that we can be safe and stable,” Al-Sisi told his parents.

“The president asked us to express any requests from him but we do not want anything; we are people with pride and dignity, [and are] so proud of our son,” Mohamed’s mother told Daily News Egypt.

Before joining the army, Mohamed attended the Kafr Saad Technical School and obtained his diploma in 2013 after studying applied arts. “After that, he worked for nearly a year with his uncle in the manufacturing of ceramic tiles,” his father Ayman recalls.

Mohamed was recruited for the obligatory military service for two years, along with five others from the same town. “Mohamed was exceptional; he was the only among his colleagues taken into the army’s Special Forces unit,” according to Ayman.

Mohamed’s father said his son was physically very fit and that his height and weight were “perfect” for the job. He first served in a training camp for nearly three months in the governorate of Sharqeya.

“I visited him twice there and he was always in a good mood,” his father said. Mohamed was then transferred to Al-Arish city in North Sinai. “The army only took those who were competent and excellent like my son,” Ayman said.

The characteristics, he believes, that enabled his son to be chosen for the post are strong intuition, endurance, and skills in military tactics and techniques. Ayman remembers how his son’s personality changed after being transferred to Sinai.

“He became more of a military man in terms of discretion,” Ayman said. “In his last visit to us, he told me: ‘Father, the world you live in is completely different then my world over there. Do not ask me about it’.”

During his military service, Mohamed would come home for a visit almost monthly. “On average, he would have 10 days off every 35 working days, or two weeks off every 40 days if he was participating in a specific operation,” Ayman said.

Mohamed took part in the military operation “Retribution for the martyr” launched by the Egyptian armed forces in September. It consisted of several security raids targeting the cities of Al-Arish, Sheikh Zuweid, and Rafah.

The operation’s first phase, in which Mohamed took part, lasted from 7 to 23 September. By 13 September, the army had announced the death of nearly 350 terrorists and the arrest of 292 suspects. By that time also, six security forces were killed and 11 injured.

Taking more pride in his son, Ayman is convinced that he raised his children “right” by forging love for their country in their hearts. “Egypt is the dearest thing we have, and this is one of the fundamental principles in our home,” he said.

Perhaps what Ayman misses most about Mohamed is his sense of bravery and responsibility. “I never considered him my son but more like a friend. He was ready to take care of his brothers Momtaz, 16, and Islam, 17,” Ayman said.

According to the father, Mohamed’s ambitions were to “take the pressure off his father’s shoulders”. “He always told his brothers that after he completes his military service, there would be no need to burden me with their demands and that they should unite together to make a living and allow me to rest,” Ayman said.

Several media figures called for a campaign to make Mohamed the figure of 2015, while social media users have described him as “Mohamed Ayman man of the year 2015” in a Twitter hashtag.

Mohamed is one of many examples of young Egyptian men who lost, and continue to lose, their lives amid efforts to combat terrorism, especially in Sinai. Several voices among the Egyptian society have called to honour the soul of Mohamed and every other martyr.