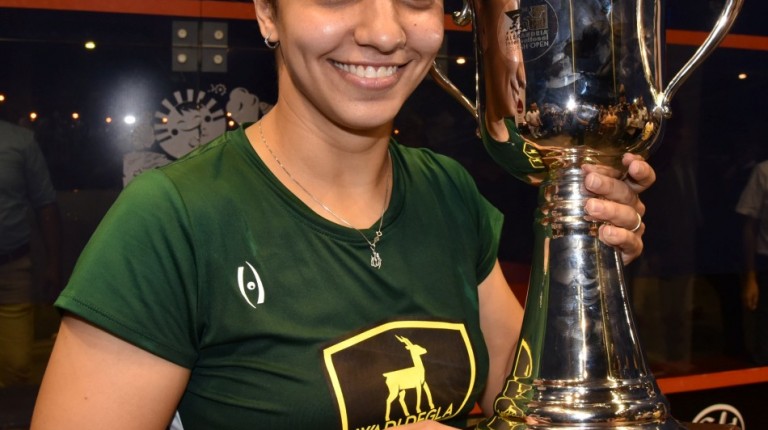 Egypt has always been associated with its achievements in squash. A number of Egyptian players have held the world title, including Amr Shabana and Ramy Ashour, although no female players won the title so far.

The year 2015 was nonetheless witness to the brilliance of Egyptian player Raneem El-Weleily, who ended the year topping the international rankings for squash after pushing Malaysian player Nicol David from the top spot in September.

Mohamed El-Shorbagy was also just around the corner from leading the men’s rankings. Egypt occupies five places in the top 10 in each classification, both for men and women in squash.

El-Weleily’s achievement came after she collected 2,831 points. She was named champion four times this year during the PSA world tour. The first of her titles this year was that of Tournament of Champions in the US.

She won the final game against the English Alison Waters. Later, she won her second title of the year, also in the US, when she came first in the Metro Squash Windy City Open. During that tournament, she was able to overcome David, the world number one at the time.

El-Weleily’s third tournament was the Alexandria International Squash Open held in Egypt. She played the final game against her national Omneya Abdel Kawy. Her fourth title was the China Squash Open, during which she also beat her fellow national Nouran Gohar.

Raneem El-Weleily only lost one game this year, against Nicol David when they competed at the Cleveland Classic tournament.

The Egyptians’ joy would have been cemented if Mohamed El-Shorbagy maintained his ranking, having led the game for 11 months. But one month before the end of the year, he was overthrown by French player Grégory Gaultier, who now tops the rankings with 1,554 points, just 98 points ahead of the Egyptian player. However, it is still a call for pride and he still has the chance get hold of the rankings again in 2016.

El-Shorbagy lost the lead when he was beaten by English player James Willstrop in the latest World Tournament held in November in the US. He left early during the third round and Gaultier collected more points, which paved his way towards the final before he beat Egyptian player Omar Mosaad in the final game.

El-Shorbagy still won more titles this year than Gaultier, with five titles, versus four for the Frenchman. He also played nine final matches this year, while the French only played seven. Both players met in the finals of the British Open and Qatar Classic, and the Egyptian was victorious both times.

The year 2015 can be considered the Egyptian squash year in terms of the international rankings for both men and women, where four Egyptians are internationally classified in both categories.