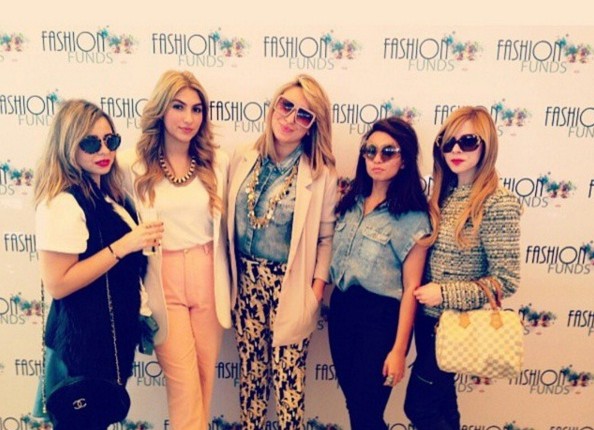 Fashion is one of the world’s most popular forms of self- expression. For decades, people have gone out and beyond, trying to document events and reinterpret the latest economic and political updates through the use of innovation in the arenas of design and personal styling.

On a local scale, the fashion industry has proven to be the one of the fastest-developing businesses in 2015. Among the countless emerging designers and endless international brands that entered the market, a select number of fashion insiders focused on a much deeper message to expand the horizons of fashion outside the borders of mindless consumption.

The initiatives varied between the empowerment of minorities, recycled garments, money donation, and clothes donation.

The long-trail of doing good started in March with a charity-oriented event. The first season of Fashion Funds seemed like a typical shopping exhibition, featuring the city’s top brands and designers. However, the event revolved around a nobler cause.

“The idea behind Fashion garage and Fashion funds is to boost our local talent and help place them on an international scope while spreading awareness about charitable organisations and aspects,”  founder of Fashion Funds and Fashion Garage Heba Serag said.

A percentage of the proceedings that day were in fact donated to “The Right To Live” for intellectually disabled children. The event built on the extended power of shopping and also focused on adding a new positive aspect to fashion’s most cemented behaviour.

“Fashion Garage is the mother company; it was originally the first online store in Egypt. We were focused on fashion scouting. We also offered consultation for local talents whilst offering them an online platform to sell their designs. Five percent of all our proceedings were for charity. ‎After the success of the charitable and positive idea, I went on and created Fashion Funds; our event-organising company,”  she said.

The innovative entity has organised three events for Fashion Funds under the umbrella of Fashion Garage. Their events in general have witnessed an increasing level of success and so their causes have also developed and varied over time. One of the entity’s previous milestones included buying two infant incubators in the Qalyubia governorate. They also received a few recognitions, including the heart medal from the international president of Lions Club Egypt.

Cairo Fashion Festival is the country’s most established platform for upcoming local talents. The pioneering entity was once the only multi-designer seasonal event that aided a number of Egypt’s top designers to organise their first fashion shows.

The entity then turned towards consumers last Ramadan when they organised one intimate campaign to encourage fashion-lovers to donate their spare clothes and designers, as well as brands, to donate their outdated collections. The initiative’s true drive was the number of experts involved. Cairo’s Fashion Festival (CFF) collaborated with a few well-known entities to ensure bigger results. The partners included Pace e Luce, Ego Communicate, Photopia, One Closet, and Face for children in need.

“Our grand plan included an awareness campaign as well as an event, where we were going to collect donated clothes and send them to the Face organisation. Due to some issues however, the event never came to life,” founder of CFF Omar Madkour said. “That being said, the campaign turned into an awareness initiative powered by multiple influencers.”

The raw video was shared online, i reaching many people and entities. The campaign’s focus on action rather than donating to a certain organisation or party helped increase feedback as well as the initiative’s overall credibility. “We did not reach our initial target yet but we started a new trend and we absolutely aim to organise similar campaigns each Ramadan,” Madkour said.

Recycled fashion might be an international interest but only a few local designers had the courage to venture in that aspect. Reform Studio is the result of Mariam Hazem and Hend Riad’s artistic passion for the environment. The design studio aims to provide all standard products with very unconventional materials.

One of the studio’s most popular items in 2015 was a recycled clutch that brilliantly mixed fashion with sustainability. The colourful accessory was not only a true fashion statement but also a great way to make use of plastic waste. They made sure to design a whole range based on the same idea.

The studio’s approach revolves around responsible products that aim to improve the environment by not depending on harmful raw material and reinvesting neglected waste.

Since they started in 2013, Hazem and Riad have received several awards for their unique approach to fashion and design. Their most recent awards are the Silver A’ Design Award in Italy and Cartier Women’s Initiative Award in Paris, France.

Egypt is highly known for its incredibly talented craftsmen and artisans. Yet, it is no secret that this particular community has been suffering lately due to the increasing import competition. With endless workshops and artistic tribes, the country definitely harbours a huge deal of handmade products, though often they cannot keep pace with machinery.

Two separate entities have managed to empower the neglected community in 2015. While Fair Trade is an international enterprise, Markaz is an exceptional showroom that showcases a variety of hand-crafted products.

Fair Trade continued its work towards a full local fashion cycle by creating a tribe-themed collection that was made out of local fabrics and designed by Egyptian designers along with local tribes and artisans.

“We work with 2,300 artisans in 13 governorates throughout Egypt, from North Sinai to Marsa Matruh, Siwa, Assiut, and others,” Fair Trade Egypt’s marketing coordinator Yara Elshennawy said.

On the other hand, Markaz is an on-ground platform for Egypt’s underground craftsmen. The team has an eye for design and quality. Their selections are always authentic and intricately well-manufactured. Markaz is not only a selling point; their regular events also aim to shed a spotlight on the artisans as well as the fine art and design involved.

Zang: Limited-edition wickedness for the youth

‘Unty’: An exclusive army of dreamers