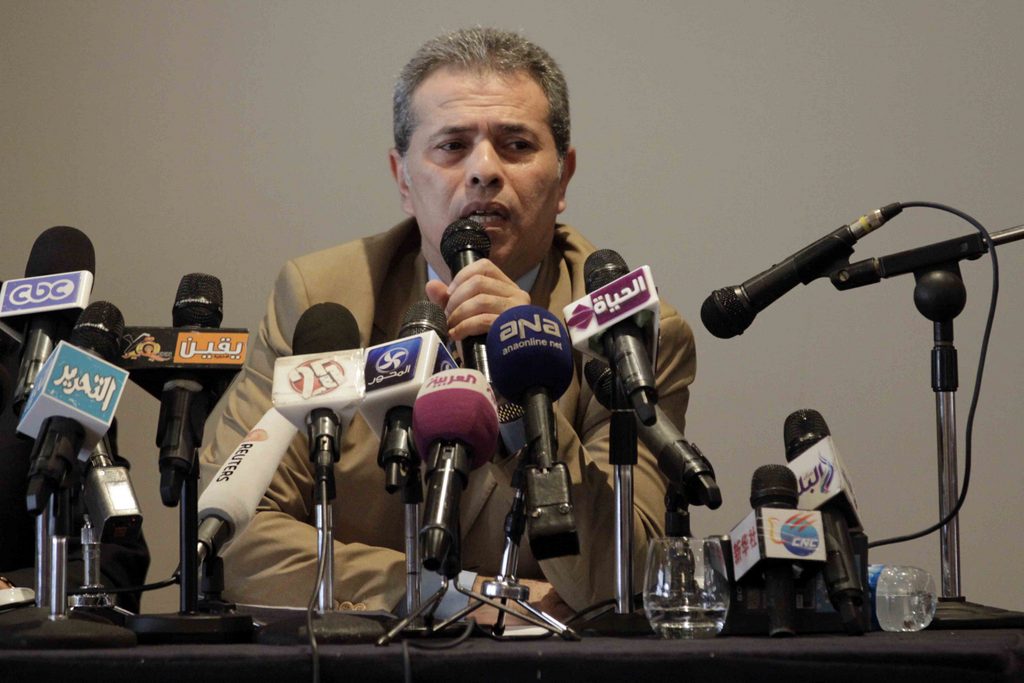 The television programme of TV presenter Tawfik Okasha, owner of the Faraeen channel, was suspended and Okasha banned from appearing on the channel’s other programmes for three months following an order issued Wednesday by the Media Free Zone’s administrative council.

The decision, issued by the board of directors, comes after Okasha’s comments regarding state security last week and claims that Okasha has disturbed the national affairs of the country, violating privacy and defamation laws. The board noted that this was not Okasha’s first indiscretion despite having being warned previously regarding his conduct.

Virginia Media Production Company, which owns the Faraeen channel, belongs to Mofida El-Feky, Okasha’s mother. In an official broadcast statement on the channel, she stated that the decision was effective immediately. Virginia Media Production Company has also been warned that it risks losing its broadcasting licence in the event of any infringements of the decision.

It has been a difficult week for Okasha, whose media presence is often the source of public debate. Last Monday, he was interviewed by rival channel OnTV, despite wide rejection by the channel’s management and workers. OnTV presenters, administrators, and owner Naguib Sawiris protested the channel’s decision to host Okasha, on grounds that he had defamed several OnTV members repeatedly on his television programme.

Okasha’s appearance with OnTV came following claims he made regarding Egypt’s state security where he made accusations that Homeland Security and General Intelligence Services had interfered with media members and parliament.

“We all [media figures] were approached by those security bodies to collaborate in overthrowing the regime of the Muslim Brotherhood and mobilize for 30 June uprising against the group”, said Okasha.

The Media Free Zone stated in its decision to ban Okasha that the 26 December episode of Okasha’s programme violated the zone’s principles and regulations by “disrespecting state institutions.”

“Virginia media company has earlier been advised to comply with all the conditions of a license to practice the profession according to the controls and the principles of the free zone and the Charter of the Arab media technical content adopted by the zone’s regional governing council or face licence suspension” the decision stated.

In the recent parliamentary elections, Okasha unexpectedly won a parliamentary seat, garnering the highest number of votes in 2015, at 70,000 votes in his homeland governorate of Daqahleya. He has presented himself as a possible candidate for parliamentary speaker, receiving political ridicule for his ambitions.

Earlier last week, he renounced his candidacy and membership in the parliament, claiming to seek “foreign political refuge.”

Okasha, 48, rose to prominence in the aftermath of 25 January Revolution in 2011. Often a source of controversy since, he is noted for having adopted a counter-revolutionary discourse and claimed the revolution was a conspiracy led by the “Zionists and Freemasons to destroy Egypt”.

Known for his colloquial style and penchant for conspiracy theories, Okasha was a former member of parliament for the former ruling National Democratic Party (NDP). In the 2014 presidential elections, he announced his candidacy before removing himself from contention.

Since 2011 until the ousting of Islamist former president Mohamed Morsi in 2013, Okasha has notably held conflicting views on political subjects and switched his opinion in the midst of the events. He was also convicted by court for defamation in August.

Okasha supporters at the High Court