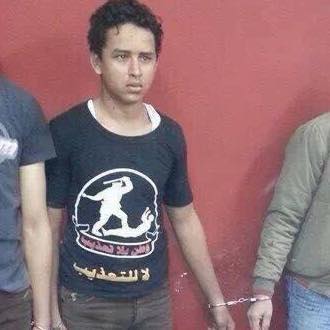 Detained student Mamhoud Hussein turned 20 on Friday, coinciding with his completion of 706 days behind bars, over an anti-torture T-shirt he was wearing and got him arrested on 25 January 2014, when he was still 18.

Hussein is in remand, as no trials have taken place so far in his case, which is yet to be referred to court. His brother Tarek Hussein ‘Tito’ further stated that during his entire pre-trial detention period, Hussein has been only questioned by prosecution authorities once.

Tito appeared Tuesday on TV, speaking about the constitutional and legal situation of his detained brother, in which he explained that Hussein has been prevented by prison authorities affiliated with the Ministry of Interior (MOI) from attending court session where his detention is supposed to be renewed.

“This happened over 26 times,” Tito said on OnTV Channel with TV presenter Youssef El-Hosseiny. “It strikes me how authorities took over 700 days to conduct investigations on Hussein’s political affiliation and not yet found out if he belongs to an illegal organisation or not,” he added.

Belonging to a ‘banned terrorist organisation’ is one of the charges faced by Hussein, in reference to the Muslim Brotherhood organisation. Hussein’s case involves only one other defendant, arrested along with Hussein.

Tito explained that his brother has been subject to physical assault in prison, in addition to having lost two academic years by not being able to pass his exams, and finally having been transferred to four different detention facilities with no apparent reasons.

“My brother strongly opposed the Muslim Brotherhood and protested against them,” Tito said Tuesday on TV. “But he is being detained with some Islamists who do not miss a chance to harass him,”he added.

For instance, according to Tito, Hussein, who has a hobby in cartoon drawing, is being told by his cellmates that drawing is a sin. Tito finally pointed out that Hussein was a child when arrested and that his detention has taken too long to acquit him from charges, or “even penalize him if proven to have committed a crime.”

Meanwhile, activists have sent posts and letter out to Hussein on his birthday via a solidarity page created on Facebook titled ‘#Free Mahmoud Mohamed.’