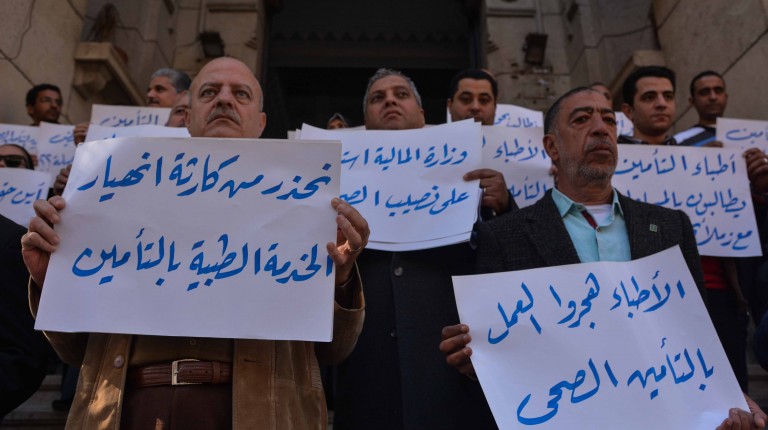 Following a meeting between Egypt’s Ministry of Health and Doctors’ Syndicate to discuss the new health insurance bill ahead of the parliamentary review, the syndicate’s secretary-general, Mona Mina, expressed concern over the bill’s funding and oversight mechanisms and its inattention to the already strained public hospital infrastructure.

The new health insurance bill aims to provide health insurance to low-income citizens, making use of new medical insurance cards linked to families, rather than individuals. However, in a statement issued on her facebook profile Friday, Mina criticized the bill’s inclusive rhetoric as belied by an interest in profit.

“The new law states that the medical insurance authority is economic instead of non-profit which means patients must pay for receiving its service, a burden not only for them but for the entire financing of the project,” Mina said.

According to Mina, the budget for the bill should be revised every five years. Should any financial deficit occur, Mina said the rate of contributions and subscriptions should change accordingly, referring to the sources of funding for the medical insurance services.

“This constitutes a threat to the service being provided as it is linked with the amount of financial contributions being made; instead funding should be allocated from certain taxes collected for the health sector,” Mina added.

In terms of selecting the target beneficiaries of the new bill, Mina said the new law maintains stipulations that were a major point of concern for the syndicate in all previous laws as well.

“The law should include everyone who falls under the minimum wage and not only those identified by the social solidarity ministry, ie families that receive monthly pensions.”

She further criticised the law’s disregard for the role of citizens in monitoring its performance and the performance of hospitals in general, instead limiting supervision over the service to three separate institutions that fall under the president’s authority.

On Wednesday, the health ministry met with different syndicate representatives to discuss the bill. In a statement regarding the meeting, Minister of Health Ahmed Emad El-Din called the health insurance bill “one of the most important benefits of Egypt’s constitution in terms of providing medical treatment with high quality and zero suffering, and hence achieving social justice”.

Only the hospitals that have qualified doctors with good salaries, high-quality infrastructure, and high-quality equipment will be included in the insurance system, according to Emad El-Din.

In this regard, Ehab El-Taher, a board member at the syndicate, previously told Daily News Egypt: “The ministry cannot exclude public hospitals from operating under the law because of their low quality without actually undertaking efforts in enhancing them.”

The Ministry of Health is planning to conduct a pilot project in several cities before implementing the new bill nationwide. The cities selected are those that already have an existing database for citizens who have acquired the recently implemented smart cards for the provision of public services.