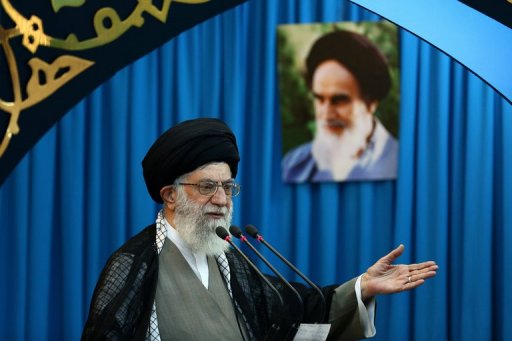 Describing him as a “martyr”, Khameini said that Al-Nimr acted peacefully and his execution was a “political mistake”.

“The unjustly spilled blood of this oppressed martyr will no doubt soon show its effect and divine vengeance will befall Saudi politicians”, Khamenei said on Iranian state television.

Saudi Arabia executed Al-Nimr along with 47 other persons including three other Shi’as and dozens accused of having affiliated with Al-Qaeda. Kahmeni said Al-Nimr was not involved in any armed movements but only “criticided in public”.

He denounced the silence of the “backers of freedom, democracy and human rights”.

Angry Iranian protesters broke into the Saudi embassy in Tehran early Sunday. Iranian local media reported that protestors set fire to the embassy before the police regained control of the building and arresting 40 persons.

The Iranian Foreign Ministry urged protesters to respect the diplomatic buildings. Protesters also attacked the Saudi consulate in the Iranian city of Mashhad.

UN Security-General Ban Ki-moon expressed dismay at the execution of the prominent Shi’a cleric; however, he urged those angry to be calm.

“Sheik al-Nimr and a number of the other prisoners executed had been convicted following trials that raised serious concerns over the nature of the charges and the fairness of the process”, said Ban’s spokesperson in a statement.

Ban said he asked the Saudi Arabian government to commute the sentences. He also condemned the violence against the Saudi embassy in Tehran.

Saudi Arabia issued a complaint to the Iranian envoy in Riyadh about “blatant interference” in Saudi local issues.

Dozens of protestors walked through Al-Nimr’s village near the city of Al-Qatif condemning his execution.

Others protested in the Bahraini capital of Manama carrying pictures of Al-Nimr’s. Few clashes happened with the Bahraini police. Bahraini Ministry of Foreign Affairs supported the Saudi actions to achieve peace in the region condemning the violation of the Saudi embassy in Tehran.

It urged the Iranian government to take responsibility for the protection of the diplomatic buildings.

On Monday, the UAE will summon the Iranian ambassador to express its objection to the Iranian official declaration regarding Saudi Arabia. UAE declared Saturday its “full, principled and unwavering support” for Saudi Arabia in any deterrent measures it takes to “counter extremism and terrorism”.

“These measures also show Saudi Arabia’s resolve and firm determination to press ahead to defuse, eliminate, and uproot terrorism and extremism and to deter anyone planning any attempts to provoke civic strife and unrest and to abuse the security and stability of the Kingdom,” UAE’s foreign minister Sheikh Abdullah bin Zayed Al Nahyan said.

Commenting on the executions, the US government expressed concerns over a “sectarian tensions”.

“We reaffirm our calls on the Government of Saudi Arabia to respect and protect human rights, and to ensure fair and transparent judicial proceedings in all cases,” spokesman for the US State Department John Kirby said in a statement. The US urged Middle East leaders to redouble efforts aimed at de-escalating regional tensions.

Kirby also added that the US had previously raised concerns with Saudi high level officials about the legal system in the kingdom. The Saudi statement described the alleged terror acts carried out by those it executed.

The Saudi Ministry of Justice said during a press conference said the Saudi justice does not accept any interference, stressing that they are committed to laws and did not consider the religion of the charged people.

Hundreds of Iraqis also protested Sunday in several locations condemning the Saudi execution of Al-Nimr. Representatives of political parties and Islamic movements participated in the protests urging the government to take action against targeting religious figures.

During one protest in Waset province, some of the protesters asked the government to close the Saudi embassy which was recently opened in Baghdad.

The governor of Waset Mazen Al Zamely addressed the protestor saying that Al-Nimr’s execution is considered a violation against all the human rights and international laws. The incident came at a very critical time for the Iraqi current government as the country is trying to unite its Sunni and Shi’a political components’ efforts to fight the Islamic State.

Former Iraqi Prime minister Nouri Al Malki said Al-Nimr’s execution is a confirmation of the sectarian approach of Saudi Arabia. On his official Facebook page, Al Malki said that the incident was a “crime and an extension of the Saudi ‘arbitrary and repressive policies”.

The Iraqi government urged its Saudi counterpart before to stop Al-Nimr’s executions. Top Shi’a Iraqi leader Ali Al-Senstany also condemned the incident in a message to Qatif inhabitants saying that he received the news with “deep sadness”.

According to Al-Nimr’s brother Mohammed Al-Nimr, the bodies of the executed persons have been buried in Muslim’s Cemeteries and will not returned to their relatives.  He also said his brother had made efforts to fix his situation but “we found doors locked”.