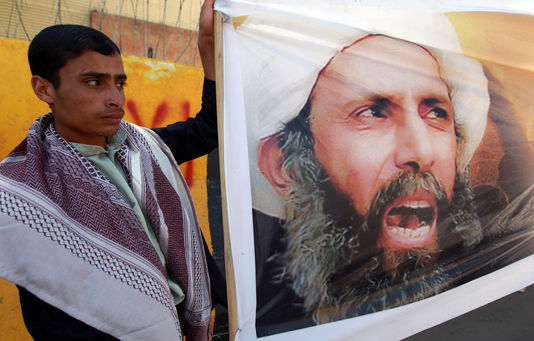 Sheikh Nimr Baqir Al-Nimr, whose execution has sparked outrage across the Middle East in Shi’a dominated blocks, was a prominent Shi’a cleric and leader who has repeatedly called for amelioration on the kingdom’s marginalised Shi’a minority.

Al-Nimr was born in 1960 in the region of Qatif. After finishing his secondary education, Al-Nimr moved to Iran to study in a Shi’a seminary before continuing his studies in Syria. He returned to Saudi Arabia in 1994.

A critic of the royal family and a protest leader, Al-Nimr was arrested in 2012 after being shot in the leg by the police. He was part of the mass anti-government protests inspired by the Arab Spring calling for elections in the kingdom and advocating for equality between Sunni and Shi’a. In his speeches, Al-Nimr has called for non-violence “in the face of government oppression”.

“The roar of the word is mightier than the sound of bullets…the weapon of the word is stronger than bullets because authorities will profit from a battle of weapons,” Al-Nimr said in one of his speeches in 2011.

Al-Nimr’s advocacy for the Shi’a minority illuminates some of the issues around the Shi’a-Sunni divide in the region. Al-Nimr’s advocacy was largely focused on the marginalised religious group and could open onto a larger political critique of the Saudi kingdom.

However, his advocacy could also be seen as a part of a wider sectarian conflict. Ultimately, Al-Nimr was accused of incitement of vandalism and sectarian strife, failure to obey, or pledge allegiance to then-king Abdullah, for the collapse of the state, and for insulting relatives and companions of the Prophet Muhammad. For these charges, he was sentenced to death.

On 25 October 2015, Nimr’s appeal of his death sentence was denied. He was put to death on Saturday. His putative ties with Iran’s ruling establishment, a geopolitical rival to Saudi Arabia in the region, prompted angry Iranian response to the execution.

Al-Nimr’s arrest in 2012 was not his first; between 2003 and 2008, he has been detained eight times, on accusations of involvement in protest and for censure of Saudi rulers in his sermons.

Al-Nimr began to gain wide popularity within the eastern province of the kingdom as his words appeal to the dissatisfied and marginalised groups in the region. In February 2009, following clashes between Shi’a pilgrims and the religious police at Al-Baqi cemetery, Al-Nimr accused political authorities of using the religious police to target the Shi’a community. He also asserted that the Shi’a will no longer remain silent.

According to Wikileaks, Al-Nimr met with US officials in 2008. During the meeting, Al-Nimr said that he was committed to fair and free elections, asserting his ardent opposition to what he described as the authoritarianism of the reactionary Al-Saud regime.

Despite the sectarian tension after his execution, Al-Nimr stressed that the oppressed should unite together against the oppressors despite their religious orientation, instead of becoming tools in the hands of oppressors.