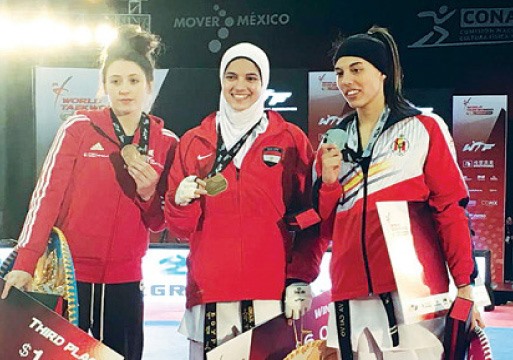 The sports’ most famous magazine MasTKDsports, specialised in taekwondo, placed Egypt’s women national team for taekwondo as the best women’s team in 2015 in accordance to its readers’ votes which reached 62.321. Second, third, fourth, fifth, sixth, seventh, and eighth places went for Thailand, South Korea, China, the US, the UK, Turkey, and Taiwan, respectively.

Hedaya Malak qualifying to participate in the next Rio Olympic Games from 5 to 21 August 2016. Malak will be performing in the light weight category (57KG). Thanks to this qualification, Malak obtained a seat in the African Qualification to the Summer Olympics 2016, bearing in mind that Egypt has only four seats, two men and two for women. Remaining seats are to be determined in the private sporting camp to be held in Australia from 9 August and lasting for two weeks.

This private camp will take place in the Australian Institute of Sport, considered to be the second best worldwide place to hold camps. The African Qualification will be celebrated in the Moroccan city of Agadir under the auspices of King of Morocco Mohammed VI from 5 to 7 February 2016.

This was not Egypt’s only victory in 2015 since in the 2015 WTF World Grand-Prix Series, Egypt won two bronze medals and was ranked seventh out of 37 countries. In this championship, Egypt’s Nour Abdel-Salam (49KG) ranked the 15th, Hedaya Malak (57KG) in eighth, Radwa Abdel-Kader (57KG) tenth, and Seham El-Sawalhy (67KG) 19th. Malak also won a gold medal in the 2015 WTF World Grand Prix Final in Mexico in December.

The Egyptian Taekwondo Federation was keen about improving its players’ performance an so hired Spanish Rosendo Alonso and his Turkish wife Gulsah Kuscu Alonso as technical directors. . The wife was recognised by the World Taekwondo Federation in 2015 as the best world trainer. Both have directed the national teams of Guatemala and Mexico.

In Egypt’s national team, five women of eight are highly qualified and most often win medals.