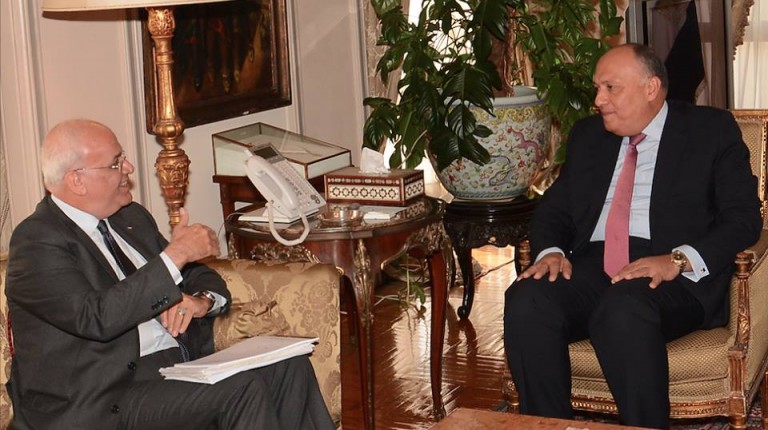 Erekat is currently visiting Egypt for consultation and coordination with the Egyptian officials on the situation in the occupied Palestinian Territory and Arab actions on both the Arab and international levels throughout the next phase.

Erekat gave Shoukry a detailed explanation about the situation in the occupied territories and the current events regarding the Palestinian issue. The state is currently suffering a standstill in light of the continued absence of concrete proposals to begin the peace process and restoration of the legitimate rights of the people. Taking serious measures on the ground would boost the confidence between Palestine and Israel and to stop settlement, which is a top priority.

Abu Zeid said the talks also included proposed steps to be taken in the upcoming period between Arab member countries at the UN. They agreed on the significance of coordination and consultation between the members of the Mini Committee of the Arab League that is concerned with ending the occupation. It also aims to reach a unified Arab stance that reflects a vision on how to support Palestinians at all levels.

Erekat met with General Secretary of the Arab League Nabil El-Araby at the Arab League headquarters, in Cairo, Tuesday, and updated him on the overall developments in the Palestinian territories.

They discussed that there are efforts at international levels to provide protection for Palestinians. The Secretary-General to New York and Washington met with senior officials in the UN, the US government, and Egypt as a non-permanent member of the UN Security Council to work on implementing agreements to end the Palestinian-Israeli conflict within a specific time frame.
Attendees of the meeting were the Palestine’s ambassador to Egypt and its permanent representative at the Arab League, Gamal Shobaki, Assistant Secretary-General for Palestine and the occupied Arab territories Ambassador Said Abu Ali.