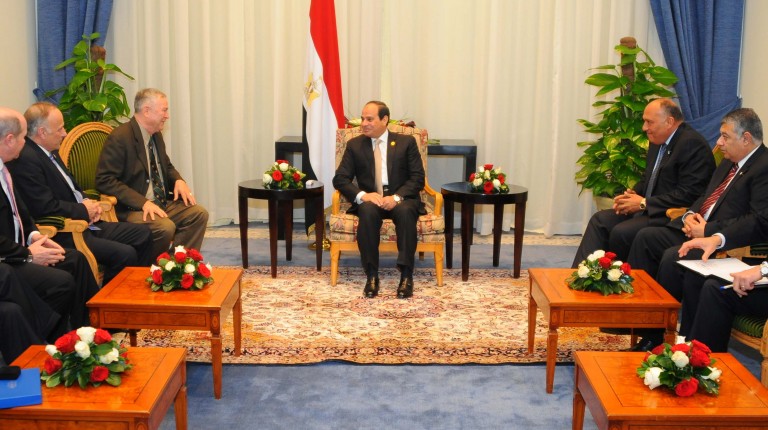 One day after the National Council for Human Rights (NCHR) delegation’s inspection of the Al-Aqrab prison, which outspoken critic of the purported human rights abuses, Ragia Omran was barred from entering, the delegation released a statement on their visit.

The issuance of the statement was pre-empted by media turmoil on Tuesday after speculation from local media sources reported that the statement had disappeared from the NCHR office.

Ragia Omran attributed the temporary disappearance of the report to an employee who had been charged with publishing the statement. According to statements Omran heard from her fellow colleagues, the employee left the office with the report in order to present it to Mohamed Fayek, the head of the council, before publishing it.

When the statement was published, it confirmed much of the government’s claims regarding the conditions of the prison.

The statement noted that families encounter difficulty in visiting their sons due to the high number of visitors and short duration of visits.

The statement highlighted that the prison administration allow only enough food to enter the prison for one day due to the absence of refrigerators to preserve food.

The prison administration confirmed that last October every prisoner received three blankets and that some winter clothes had been allowed into the prison, on the condition that they did not bear any written phrases. Additionally, the prison made provision for each prisoner to have one mattress.

The report added that blankets are available in the prison canteen for whoever wants to buy extra blankets. Due to Egypt’s cold winter, the prison administration distributes two additional blankets.

The report claimed that the prison administration is eager to facilitate the examination process for prisoners who are students enrolled in schools or universities. The administration further claimed that it seeks to offer these prisoners the required books, and has arranged rooms for exams.

The delegates also highlighted that the medical treatment of prisoners is adequate.

The single negative feature of the report was the difficulty faced by the delegates in meeting with prisoners as prison officials refused to allow the NCHR member Dr Salah Salam to provide medical treatment to fix prisoners who were in critical condition.

On the issue of the disappearance of the report, Daily News Egypt spoke with Adam Fathy, the council spokesman, and Mohamed Abdel Aziz, a member in the council.  The report given by each contradicted that of the other.

Before the release of the report, Daily News Egypt spoke with Fathy. At that time, he said he did not have any information on the report’s disappearance. Meanwhile Aziz said the statement is available on the website and that it had not disappeared.

Abo Bakr Abdel Kereem, the Interior Ministry spokesperson said Omran’s name was not included on the visitors’ list, and there is no any personal enmity towards her as she has visited several prisons before.

He added that the ministry does not have anything to hide from Omran’s assessment of the status of the prisoners in Al-Aqrab prison.

The last two reports by the NCHR contradict the numerous complaints from prisoners’ families.