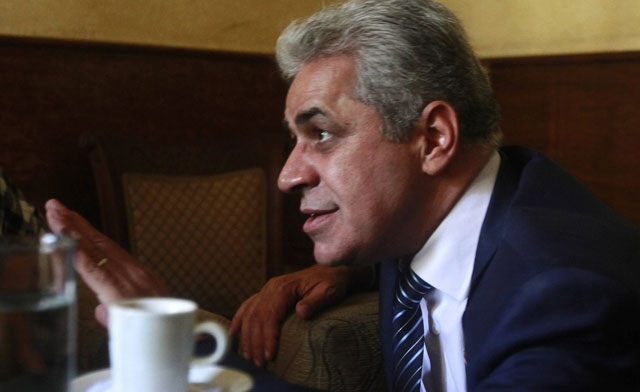 “The [Egyptian] people sacrificed a lot but they still live in poverty, corruption, dependence, and tyranny. The way we are being ruled is exactly like Hosni Mubarak’s era, despite four different rulers since the [25 January]  2011 Revolution,” Sabahy said. “The regime is using the same old policies that led to two mass uprisings. It should reconsider itself and listens to other voices that aim to achieve the demands of 25 January and 30 June.”

He further claimed that Al-Sisi was losing popularity for failing to provide solutions to the people. The regime must align with the people’s demand since they relied upon the government to bring them to power.

Sabahy went on about the 25 January Revolution’s demands of bread, freedom, human dignity, and social justice but was suddenly intercepted. The programme logo suddenly appeared on the screen of Dream TV Channel but Sabahy’s was still heard speaking in the background.

The programme management issued a short statement on Facebook apologising for halting the broadcast due to a technical problem and promised to return shortly.

After announcing the return of the programme, Al-Ibrashi continued the interview with Sabahy after claiming that a power cut had occurred. Al-Ibrashi said “clarification was necessary” to avoid claims of his guest having been censored over critical content of the regime.

Sabahy rallied for the presidential elections against Al-Sisi in 2014 and won only 3% of votes, according to official records. In comparison, Al-Sisi swept off the elections with about 97% of votes.

Sabahy became less present in the public sphere and was seen once in an official encounter with Al-Sisi in February 2015 during an army symposium and was addressed by Al-Sisi in his speech. Sabahy survived criticism with his supporters through the argument that “despite rivalry, it was important to send a message of ‘national unity’”.

His recent appearance however sparked critical reactions. According to users on social media, Sabahy’s criticism of Al-Sisi and the regime was negatively received and talks about his “obscure motives” to speak were considered to be linked with the approaching fifth anniversary of the 25 January Revolution.

The media in Egypt has portrayed a negative message about the 25 January Revolution and focused instead on 30 June mass uprisings, which brought Al-Sisi to power after toppling the Muslim Brotherhood.

Court renews detention of Mohamed Hussein for another 45 days