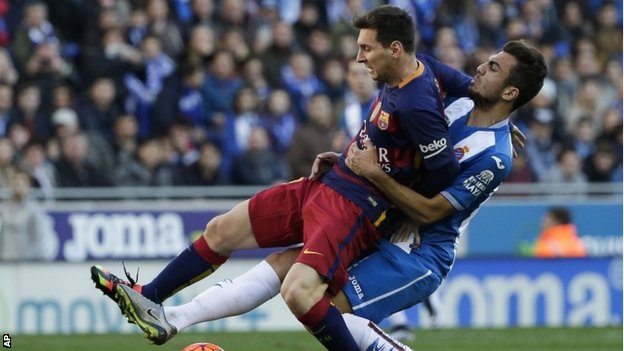 Barcelona boss Luis Enrique was angry at match officials during the Catalonian derby game between Barcelona against Espagnol (4-1) in the first leg in round 16 for Spanish cup Copa del Ray.

Barca top star Argentinian Leonil Messi made the comeback for Barcelona in 13th min after Espanyol striker Caicedo opened the scoring for his side in the 9th min. Messi scored his double in the match and his 241th goal in 241 home matches for Barcelona with a astonishing free kick just before halftime.

Centre back Gerard Pique added the third goal in the early stages of the second period for Barcelona as Espanyol were unable to handle Luis Enrique’s men before Neymar scored with an excellent strike fourth after Messi’s second assist of the night in the 88th minute.

The visitors had two players sent off in the second half at Camp Nou and nine others, four of whom play for Barcelona, received a yellow card. “The limits are set by the referees,” Enrique said. “Tonight there was intensity and tension but it’s the match officials who mark the limits. Those are the ones who are in charge of making sure this is football and not American football.”