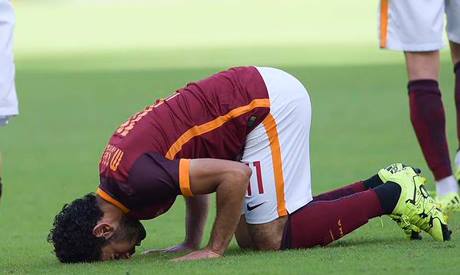 Egyptian international player and AS Roma forward Mohamed Salah was injured during a draw against AC Chievo Verona (3-3) in round 18 for the Italian Serie A and was considered doubtful to be fit to play in the upcoming match against AC Milan.

However, according to Italian reports and Sky Sport, tests have ruled out initial fears of a muscular lesion.  Roma manager Rudi Garcia said that Salah could be fit for a match that is vital in keeping AS Roma near the top of the Italian Serie A table.

Roma had only one win in nine matches before the mid-season break. The paucity of wins came in addition to a humiliating defeat against Barcelona in the Champions League. The shocking Coppa Italia exit against Spezia garnered Garcia fervent criticism from fans and media, calling for Garcia’s job.

“I’m not interested in whether this match will be decisive for my future; I don’t have time to worry about these things”, Garcia said in the pre-match news conference Friday. “Managers that win can talk, those that lose have to keep quiet and work, and that’s what I’m doing.”

Roma has won only once in their last five league games against AC Milan, with three draws, and one loss.