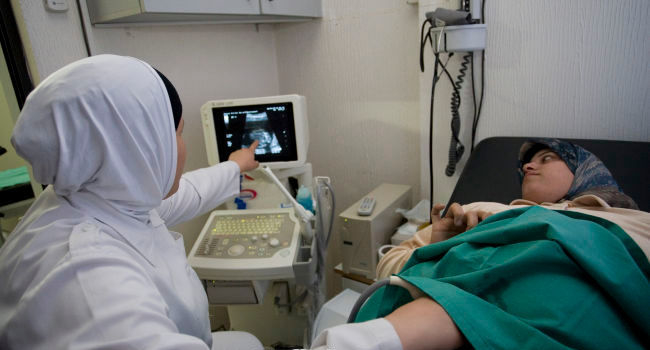 Editor’s Note: This story is part of a special reporting project, “What Lies Beyond.” It is featuring students across six universities, reporting in-depth features and investigations on many of Egypt’s current events and issues.

Fatima Ahmed, 30, got married to the man of her dreams after an intense love story. The couple was anxious to start a small family with a baby and embark on a new stage of their lives together. “It was a beautiful surprise for both of us to learn that a year after our marriage, I was pregnant with triplets,” she said.

She gave birth to two boys and a girl and the newlyweds became parents. To her and her husband, the future seemed bright. However, six months after the triplets were born and during the time she was breastfeeding them, she started feeling unwell. “I was constantly tired and drained for no reason,” she said.

She visited her gynaecologist who, in turn, performed several usual check-ups. “Fatima, you’re pregnant again, with triplets,” the doctor told her.

“My husband and I were shocked,” she said after received the news. Her doctor sat her down and explained the situation. He advised her that keeping the new triplets will jeopardise her health, and suddenly, the option of abortion was on the table.

Approximately 68,000 women die annually around the world from unsafe abortion complications, according to estimates by the World Health Organisation (WHO).

There is a significant shortage of data in terms of abortion cases among Egyptian women due to the absence of a national database that includes all safe abortion cases, which imposes a major obstacle in advancing the healthcare system.

The only study available dates back to 1998, when the Population Council surveyed Egyptian women for a month and stated that the rate of abortion is about 14.8 for every 100 pregnancies. In rural community, 14% of women have performed abortions on themselves at least once.

Those numbers are not definitive, since they do not include the cases of abortion conducted outside hospitals. However, the Ministry of Health’s figures on mortality among pregnant women stated only 1.9% women died during pregnancy in 2006, but did not mention further details on the women’s status.

In Egypt, the majority of women seeking abortion resort to unsafe practices, particularly because of the legal restrictions imposed on the procedures. The Egyptian law criminalises abortion in Penal Code articles 260, 261, 262, and 263 and provides no exceptions, which prevents specialist physicians from performing the procedure, in fear of legal prosecution.

Penalties could range from six months to three years in prison for women, while doctors could get from three to 15 years in prison. Even in cases of sexual assault, the law does not allow abortion, allegedly to avoid its “misuse”.

The National Council for Women (NCW) has previously called for exceptions to the law to allow pregnancy in cases of sexual assault and in the case of potential physical disability for the baby.

The NCW details different cases in which abortion might take place in Egypt, in a study that aims to fight gender discrimination. The study highlighted that there are many abortion cases, but few legal verdicts. They attributed this to the fact that most abortion cases take place undercover and are usually only discovered if the woman dies.

However, abortion cannot be allowed as a method for Planned Parenthood. “If the family cannot afford having the baby, abortion should be an option,” the statement further explained.

Despite the Egyptian law on abortion, there are many reasons women still choose to abort their pregnancies, irrespective of the way it is done.

Medical textbooks describe abortions as a procedure of induced termination of pregnancy. It can be conducted through the usage of two pills taken together – Mifepristone and Misoprostol (Cytotec) – or through the medical procedure of Dilation and Curettage, known as D&C, and performed by gynaecologists. In more advanced pregnancies, past 14-16 weeks, a procedure called hysterotomy, similar to the caesarean section, may be performed if medical termination was unsuccessful.

Nevertheless, in rural areas and among lower-income segments of society, there are cheaper, unmonitored, and hence more dangerous ways that women resort to in order end their unwanted pregnancies.

The lower-income the areas are, the more severe these techniques become. Some women ingest high doses of malaria medication or measles vaccine. In other cases, objects such as wires and stems of herbs are inserted into their vaginas to disrupt the pregnancy and provoke a miscarriage. These practices, whether performed by the woman herself, a midwife, or a generally unskilled individual in an unequipped environment, can lead to horrifying complications, or even death.

In the higher-end neighbourhood of Al-Manial , at the renowned Gohar Clinic for gynaecology, Hussein Gohar runs the small clinic. He believes the law should be more flexible in dealing with abortion.

He said women seek abortion for different reasons, whether physical, related to the mother’s body or that of the baby, or psychological reasons.

According to Gohar, social and financial reasons are sometimes even more compelling than medical ones. “Why ignore them if they truly exist?” he said. “The woman knows well she will bring a child to life that she will not be able to raise properly.”

The government is turning a blind eye to abortions taking place despite the restrictive laws, according to Gohar. “This exposes a larger number of women to the dangers of operations performed in secrecy by underqualified medicine practitioners in suboptimal conditions,” he said.

Gohar is one of many doctors seeking more legal flexibility towards abortion in Egypt.

To Fatima Ahmed, the idea of aborting her pregnancy sounded frightening, considering all the risks, but she had her reasons. “I already had three infants who needed to be breastfed, given special care, and a budget,” she said. Her body was still fragile and she could not for a second imagine carrying three more babies.

She and her husband agreed together that an abortion was necessary, although her doctor advised her it was illegal and costly. Lack of options left the family clueless, and yet she believed she was luckier than many women, whose only choice was unsafe abortion.

Noha M, 26, an unmarried woman, had her own story with abortion. When she experienced signs of pregnancy, she went to a gynaecologist who was recommended by a friend and her tests came back positive. She tried taking contraceptive pills, but it did not work.

Noha said she was not ready to have a baby at that point of her life and hoped her gynaecologist would be open to the idea of abortion as her friend promised. When Noha asked the doctor about abortion, he approved and recommended D&C.

However, the idea of a surgery intimidated Noha. She conducted brief internet research and found out the pills can work for her early pregnancy. Noha then asked her doctor to write the prescription for the abortion pill available in Egypt, Cytotec.

After a long search for the pill, Noha found Cytotec in a pharmacy in Zamalek. She started taking the pills per the information she found online. “The dosage was scary because Cytotec alone must be taken in large quantities in order to function,” she said.

“I was bleeding for a week,” Noha recalled. Time passed slowly for her, but when the bleeding finally stopped, she went back to the doctor who told her that the pregnancy was successfully terminated. “I was so relieved,” she said.

Obstetrics and gynaecology consultant Mohsen Muhammed however views abortion in different light from Noha’s gynaecologist, who approved abortion. “I do not think abortion should be legalised,” he said. “Religions are against it and consider it a form of murder.”

Muhammed said women who have to deal with the results of unsafe abortion, due to their poor financial conditions or lack of access to contraceptives, are exposed to infections that could lead to infertility. Other complications include uterine perforation, associated with an injury to the bladder or intestines, or in the worst case, death.

In Islam, abortion is only allowed within the first 120 days of conception. It is also allowed only if pregnancy endangers the mother’s life or if the foetus suffers a defect discovered within the same time frame. Islamic scholars however have conflicting views in rape cases, but they all still agree pregnancy from rape can be terminated within the same period of 120 days. On the other hand, Christianity rejects abortion completely.

There is a false connection between abortion and lack of morality, as well as a general belief that abortion is done exclusively by unmarried women who get pregnant by “fornicating”.

Abdel Hameed believes the real reason behind criminalising abortion is not fear over babies’ lives, but rather fear from premarital relations. The proof is that children who are born outside the marriage institution are stigmatised for it their whole lives.

Doctors’ Syndicate board member Ehab El-Taher said in the syndicate, illegal abortion is one of many violations committed against the profession’s code of ethics.

Head of the investigation committee of the Doctors’ Syndicate and member of its general assembly Tarek Kamel said Article 29 of the Doctor’s Code of Ethics states that abortion is only permitted if it will protect the pregnant woman’s health and life.

Despite the harsh regulations, the syndicate cannot keep a firm grip over illegal practices. The only mechanism the syndicate has to monitor illegal abortions is the complaints received from women about complications they were exposed to. The chances of the syndicate receiving a complaint is slim, or nonexistent, because it penalises both the woman herself and the doctor, Kamel said.

Abdel Hameed believes the government must incorporate Article 29 of the Doctors’ Code of Ethics into law to legalise the whole process and revoke the article that penalises women who seek abortion in the Penal Code.

The restrictions by the law leave women often without options, making them vulnerable to illegal abortion and consequently to exploitation by corrupt medicine practitioners who blackmail them for sexual services or exaggerated fees.

“Eventually, hundreds of silent victims are stranded on the horns of a dilemma every year, having to choose between giving birth to babies they cannot or resorting to adumbral risky procedures in absence of government flexibility and loud societal dialogue,” Abdel Hameed said.

Abortion in Egypt: Whose choice?