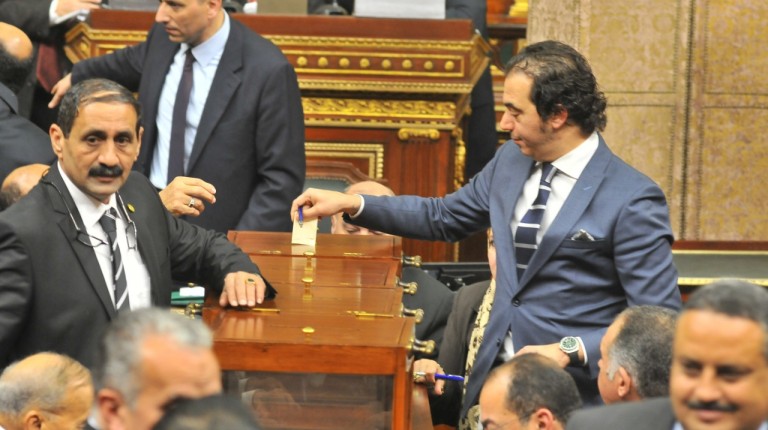 The voting process started at 2 pm and took over four continuous hours.

A runoff election between Alaa Abdul Moneim, a member of “Egypt’s Support” coalition, and Suleiman Wahdan, the candidate fielded by the Al-Wafd Party, took place Monday for the position of second deputy speaker.

Wahdan received 285 votes, compared to 281 votes for Abdul Moneim, out of a total 566 valid votes. There were eight void votes.

El-Sherif was one candidate amid a field of 16 candidates, becoming the first deputy speaker. El-Sherif obtained 345 out of 542 valid votes.

Abdul Moneim received more votes in the initial round of voting than Wahdan, with 225 votes compared to 157 votes, respectively.

However, according to the official website for Egypt’s parliament, the results “are close, [and thus] require a second round”.

The coalition, born out of the “For the Love of Egypt” electoral list managed by Sameh Seif El-Yazal, triumphed Sunday when its candidate for parliamentary speaker, Ali Abdel Aal, was elected.

Abdel Aal was also supported by members of the Salafist Al-Nour Party, which had announced Saturday its support for the candidate. The Free Egyptians Party (FEP) also supported Abdel Aal, according to head of the FEP’s parliamentary body Alaa Abed.

The first parliamentary session was held Sunday. It lasted for nearly 17 uninterrupted hours and resumed Monday. It witnessed several disruptions, in addition to notable violations committed by notorious MP Mortada Mansour, who refused to adhere to the official parliamentary oath. Instead, Mansour deviated to make statements hostile to the 25 January Revolution.

Political analyst Hassan Nafea expressed his disappointment over the scene that unfolded during the parliament’s first session, telling Daily News Egypt that “the chaotic situation highlighted [that] politicians’ lack the political experience and maturity”.

Nafea further pointed to the “dangerous implications” stemming from a “majority of MPs biased against the 25 January Revolution, who consider 30 June a corrective revolution”.

Nonetheless, in their speeches to the rest of the members, the parliamentary speaker and the two deputies acknowledged the 25 January revolution, along with the revolution of 30 June, as stated by the constitution.

The remaining procedures for the parliament are the discussion and adoption of a new code of conduct, as well as electing members and heads of the different internal committees, which are currently 19 committees and could increase.

According to preliminary indications published by the official website of the Egyptian parliament, the committee that attracted the highest number of MPs is the National Defence committee, with 64 members, while the lowest committees were those of Manpower, Transportation and Religious Endowment, with 10 members in each, so far.