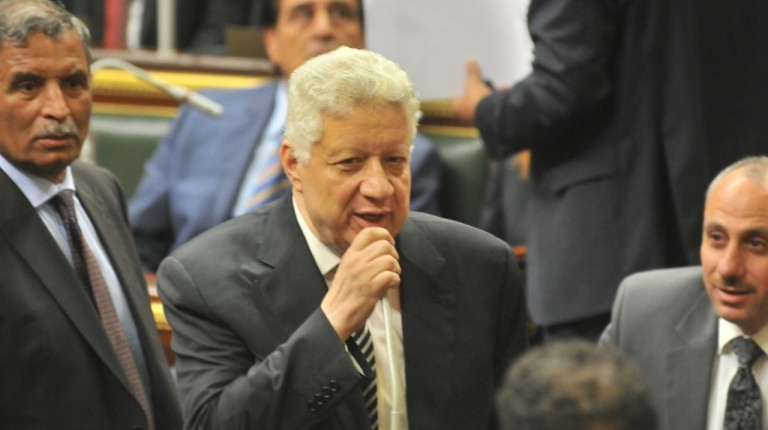 Several MPs expressed hostility toward the 25 January Revolution during the first parliamentary session on Sunday which has raised concerns about the future of freedoms, human rights, and justice called for by the thousands of protestors who gathered in Egypt’s main squares in 2011.

MP Mortada Mansour, well-known for his strong opposition to 25 January, aggressively expressed his rejection of the revolution by stating he did not “acknowledge it”. He sparked controversy within the parliament when he made ad hoc additions to the oath of parliamentary office read aloud by all MPs.

The initial text stated in the constitution was: “I swear by The Almighty God to loyally uphold the republican system, respect the Constitution and the Law, fully uphold the interests of the People, and to safeguard the independence, integrity and safety of the nation.”

But for Mansour, he attempted to only respect the “articles of the constitution” and not the constitution as a whole because according to him, he “cannot tolerate the 25 January Revolution”. He further referred to the constitutional introduction, which  recognises the revolution, calling it “useless”.

“Realistically speaking, this parliament includes many members with security backgrounds and figures who have repeatedly and explicitly announced a stance against the 25 January revolution,” MP Haitham El-Hariri said.

El-Hariri is currently a member of the Social Justice coalition which was formed to address citizen’s basic needs and promote social justice. The coalition has spurned leading parliamentary positions to focus on “alternative policies” that will achieve the revolution’s demands.

“What we are witnessing in the current parliament in terms of the control of the Egypt’s Support coalition is one of several natural results of how the entire process of establishing the parliament was conducted, starting by the laws and even during the elections,” El-Hariri explained in statements to Daily News Egypt Monday.

The prevailing question to emerge from the first parliamentary session centres upon the extent to which the counter-revolutionary sentiments of certain MPs  will impede improvements in political, economic, and social rights.

Local NGOs active in the human rights’ field launched a new campaign entitled “Cannot Pass” to address those laws that must amended to secure the rights of Egyptian citizens.

Egyptian Initiative for Personal Rights (EIPR), who organised the NGO coalition, issued a report issued Saturday in cooperation with the 12 other NGOs delineating recommendations to ensure enforcement of the constitution and human rights standards amid the prevailing national and regional security concerns.

“We will be watching parliamentary performance but of course the first session has its indications,” EIPR’s lawyer Adel Ramadan told Daily News Egypt Monday.

“Although it is too early to judge, we certainly do not have high hopes on achieving major developments in human rights,” Ramadan said.

Ramadan contended that progress laws and legislation that secure freedoms will see continued opposition.  According to Ramadan, efforts to reform the political systems and guarantee rights by addressing influential MPs will prove ineffective if the MPs in leading positions have already established stances that are not aligned with demands to improve human rights.

El-Hariri preferred to leave space for optimism and hoped that even for those who oppose the revolution under the pretext that it was a conspiracy against Egypt will grasp the chore idea of the revolution.“Can they understand that the people rebelled against policies of the former regime, took to the streets for real demands, and try to avoid that by learning from past mistakes?”

Ramadan has previously drawn a parallel between the spirit of the revolution, embodied in the citizenry’s demands, and the basic needs he and the Social Justice coalition have prioritised.

Despite acknowledging that a large number of members in the new parliament are affiliated to the dissolved National Democratic Party (NDP) and businessmen who are biased toward the interests of the elite, El-Hariri’s message to the people is “do not be afraid, not every MP is working against your well-being.”