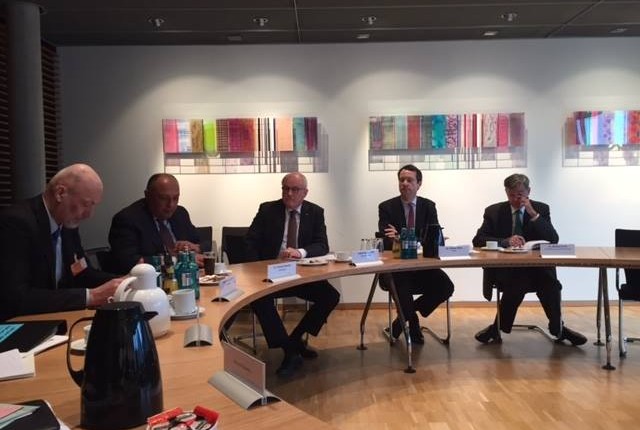 Egyptian Foreign Minister Sameh Shoukry met with the leader of the German parliament (Bundestag) majority, Volker Kauder, on Tuesday where they discussed ways of reinforcing bilateral relations between Egypt and Germany.

Foreign Ministry spokesperson Ahmed Abu Zaid said in a statement that both sides also discussed current regional affairs, including the conflicts in Yemen, Syria and Libya, in addition to the Saudi-Iranian tensions and their consequences.

Kauder congratulated Shoukry on the convening of the Egyptian parliament, noting that Germany hopes to boost its economical and political cooperation with Egypt.

During the visit, Shoukry spoke about the latest developments in Libya and the important role played by Egypt in the neighbouring country.

According to Abu Zaid, the meeting reflected Germany’s understanding of the challenges Egypt faces.

Shoukry began a four-day visit to Berlin Monday to meet ministers and officials from the German government.

During the visit, Shoukry is set to meet with his German counterpart Frank-Walter Steinmeier and the German Ministers of Interior, Economy, and Economic Cooperation.

Meanwhile, Minister of the Interior Magdy Abdel Ghaffar met with Julius Georg Louis, Ambassador of the Federal Republic of Germany in Cairo Monday.

During the meeting, they reviewed some issues of common interest, with strengthening the security cooperation at the top of their priorities.

According to a statement released Tuesday by the Ministry of Interior, the German ambassador praised the ministry’s counter-terrorism measures, and efforts to maintain stability. He expressed the German government’s determination to expand security cooperation with Egypt in the upcoming period.

Abdel Ghaffar reviewed the overall security developments on the local and global levels and praised the security cooperation with Germany. He further welcomed the development of information coordination with the German security services, in light of the current regional challenges and threats.

He also explained the ministry’s strategy, which aims at maintaining the balance between securities and respecting the fundamental rights of citizens.

He highlighted the success of the police in securing the parliamentary elections, as international observers praised the police’s performance.