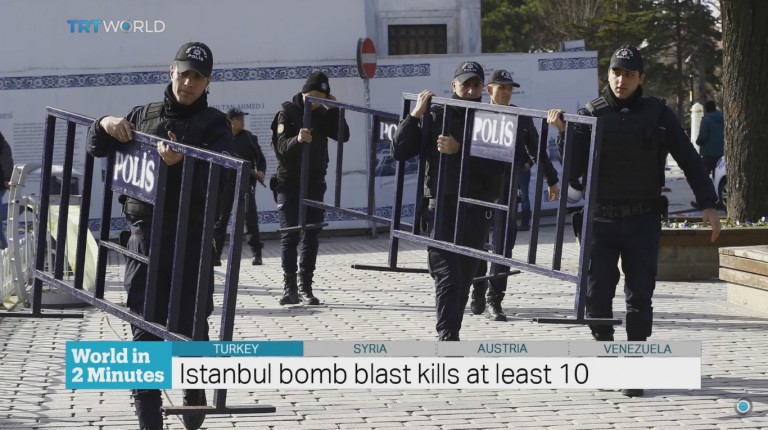 Turkish President Recep Tayyip Erdogan said a Syrian suicide bomber is believed to be behind Tuesday’s attack in Istanbul that left 10 persons dead and 15 others injured.

The explosion took place in Istanbul’s Sultanahmet tourist district at 0820 GMT around the Obelisk of Theodosius, a monument from ancient Egypt which was re-erected by the Roman Emperor Theodosius.

Police subsequently have sealed off the historic Sultanahmet square and evacuated people from the tourist area.

“I condemn the terror incident in Istanbul, assessed to be an attack by a suicide bomber with Syrian origin. Unfortunately, we have 10 dead including foreigners and Turkish nationals,” Erdogan said in a televised address on Turkey’s NTV television station.

Erdogan contended that Turkey is the first target for terrorist attacks because of the country’s own determined fight against terrorism.

The European Union stressed its support for Turkey in a joint statement by Commissioner Johannes Hahn and foreign affairs spokeswoman Federica Mogherini. They said the EU and Turkey stand united “against all forms of terrorism” and that they must increase their efforts in this regard while respecting the obligations of international law, human rights, and humanitarian law.

The nationalities of the victims remain unknown. However, Turkey’s Dogan news agency reported that six Germans, one Norwegian, and one Peruvian are among those injured.

German Foreign Minister Frank-Walter Steinmeier told reporters in Berlin that there may be Germans among those killed in the explosion.

“We don’t have all the information yet […] but we fear that German citizens could be and probably are also among the victims and injured,” Chancellor Angela Merkel told reporters.

In the wake of the attack, Denmark and Germany issued warnings to tourists from their countries, urging them to avoid crowds outside tourist attractions in Turkey.

The Sultanahmet district is heavily populated by tourists since it houses the Blue Mosque and the Hagia Sophia in addition to hundreds of hotels and restaurants.

On 10 October, 103 people were killed when two suicide bombers detonated a bomb in a crowd of peace activists in Ankara. The attack was attributed to the militant group “Islamic State” (IS).

As with other attacks in the region, analysts expect that one of the resulting effects of the Tuesday’s bombing will be a retraction in Turkey’s tourism sector.

Senior Research Analyst at Euromonitor International Kinda Chebib, a London-based market intelligence firm, said the attack is expected to “impact negatively on inbound flow to Turkey on the short-to-medium term”. According to Chebib, Euromonitor expects a slow economic and tourism rebound.