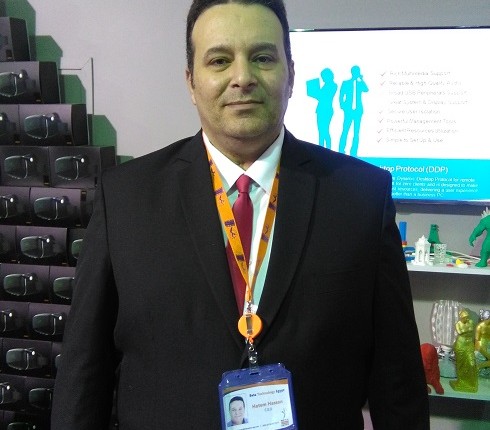 Hassan revealed, during an interview with Daily News Egypt, that the company has received an offer from Lenovo to buy the rights to the idea of manufacturing wireless laptop chargers, which Beta Technology is currently developing, but Beta refused.

What are the challenges your company faces in the Egyptian market?

The dollar shortage is one of the main challenges facing the information technology (IT) sector in general since it mainly depends on imports, whether for parts that go into manufacturing or devices and equipment. On the other hand, the regulations set by the Central Bank of Egypt (CBE) for the withdrawal and depositing of dollars represent another challenge, despite the recent modification on them.

Government bureaucracy among many authorities and decision-makers is a major challenge. For example, I applied for the allocation of a piece of land in the free zone to set up a plant to manufacture and export 3D printers, but the request was put on a waiting list, despite the country’s current need to increase investments from the private sector and increase exports.

The lack of trained and skilled labour is also one of the challenges the company faces in the Egyptian market, since the educational level of students is not sufficient for the job market.

How do the CBE’s regulations on the dollar affect the sector?

The CBE’s regulations for the withdrawal and depositing of dollars requires companies to pay 50% or 100% of the value of the imported consignment before its importation, which companies cannot do because it represents a severe financial pressure.

These regulations set by the CBE are impossible, especially as there is no local alternative for imported products, and with a major need for them locally. The problem of the government is that it still considers the telecommunications and IT sector as a luxury not a necessity, while the strong world economies rely on IT to develop themselves and increase their growth.

How can one overcome these challenges?

We need to activate the single window system for investors, which would facilitate business registration and termination procedures, which saves a lot of time and effort for investors. We also need to develop a department or a ministry within the government, which would be responsible for the development of government services provided to citizens or investors.

We have to make use of the successful experiences of neighbouring countries, such as the UAE. It did not have any market presence in the 1990s and now it has become a highly developed country with one of the strongest economies.

The maximum wage law should be repealed since it caused trained Egyptian labour and competent leaders to move abroad, as the price of highly qualified information technology labour is high. This law also led the government sector to lose most of its skilled trained labour.

We must work on developing education, especially technical and vocational education, to create a base to drive economic growth and we should also cancel free college education.

What investment opportunities do you see in the IT market?

Egypt is still an emerging country on the level of communication and IT, which makes it fertile ground for many investment opportunities. There are great investment opportunities in the Smart Villages and technological areas, especially in the Delta governorates and Upper Egypt, where there are youth with creative ideas who only need a supportive environment.

Egypt’s unique geographic location makes it a centre for the export of technological services in the Middle East and Africa, especially since Egypt has a lot of resources but we do not know how to utilise them.

What are the main aspects of the company’s strategy in the upcoming period?

We will launch new technology that works to facilitate the completion of business and save resources and costs. This technology, which depends on cloud computing, consists of devices known as the V cloud point that works on converting screens to computers, depending on one computer or one server only.

For example, if there are 100 employees in a company who need computers, there is no need to buy 100 computers; only one computer would be enough, with 100 V cloud point devices. This will save 90% of a company’s or institution’s operational costs.

We developed these devices in cooperation with a Chinese company in Hong Kong, which helped make the devices 60% than regular devices faster in data transfer. This allows for running 100 V cloud point devices on one server.

This technology also contributes to saving electric power for the institution that uses it. They consume 5 W, while normal computers consume about 250 W. According to a study we conducted in 2013, in collaboration with the Energy and Electricity Research Centre, the average electricity consumption for a company with 100 computers for five hours per day and costs up to EGP 31.8 per day and EGP 45,000 annually. On the other hand, the rate of consumption of V cloud point devices is EGP 2.5 per month and EGP 3,200 annually.

Have you started promoting your new product?

We are currently holding a number of discussions with some companies and government agencies for them to benefit from the new technology that we offer exclusively in Egypt, the Middle East, and North Africa. We have already signed an agreement with a hotel chain for the use of V cloud point. The current economic conditions in Egypt will help this product spread rapidly due to its cost-cutting effect.

TE Data requested to register our product under its own brand, among a number of projects for the development of education on which TE Data is currently working. However, we refused and asked for the product to be put forward in partnership with us, carrying our own brand.

Are there new products you plan to put forward this year?

Which company made the offer and how did you respond?

The offer was made by Chinese company Lenovo. We rejected it of course because we have the ability to finish developing our product and manufacture it ourselves to become the only supplier and manufacturer in the world. This decision supports our plans to become a strong company, both regionally and globally.

What are your plans to increase your business size during 2016?

What are your plans to manufacture locally?

What about your expansion plans abroad?

Currently, we have two branches in the UAE and China and we will open a new branch in the next few days in Morocco. We also plan to expand to Lebanon and Nigeria.

IT startups: Government must invest

Incubators for IT startups