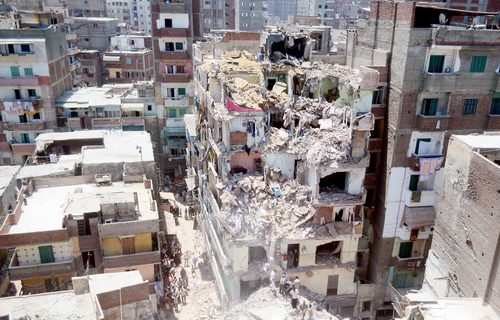 Two children died and five people were injured when a building collapsed in the Minya Al-Qamh district of the Sharqeya governorate late Monday, the Ministry of Health annouced.

One of the two children was eight years old and the other was 17. Those who were injured were sent to hospitals to receive medical care, according to the Health Ministry’s Tuesday press statement .

The building collapsed without warning with 30 residents still inside. Security forces and ambulances arrived at the collapse site. Seven victims were transferred to hospital, three of whom died.

The governor added that a committee was formed to examine the surrounding buildings, and the examinations revealed the presence of cracks in two buildings. The residents of the two buildings were immediately evacuated.

The governor confirmed that about 13 people were found under the rubble of the collapsed building. He ordered EGP 10,000 to be paid as compensation for each of the children, and EGP 2,000 in compesnation for each injured person.

Collapsed buildings are a common occurrence in Egypt, mainly due to poor construction and infrastructure, and compounded by negligence and corruption from contractors and owners of buildings.