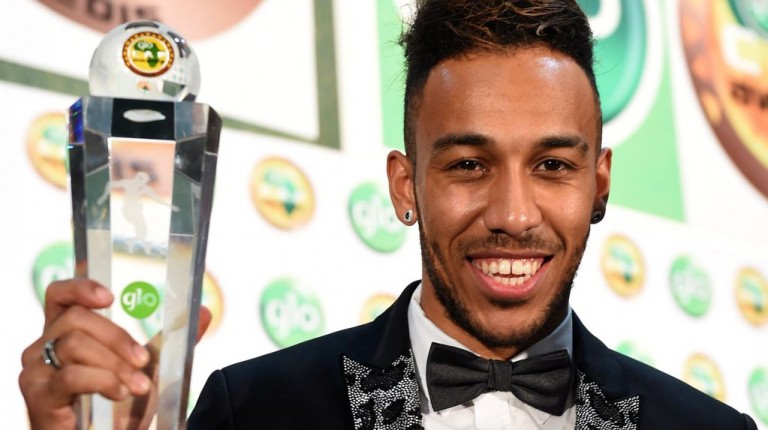 Gabonese striker Pierre-Emerick Aubameyang, 26, plays for German club Borussia Dortmund and has been crowned CAF African Player of the Year for the first time.

Prior to that date, the highest accolade for African players was awarded by France Football magazine since 1970, and was named the Golden Ball Award. Egyptian legend and Al-Ahly striker Mahmoud El-Khateb took the award in 1983.

In 1995, the France Football award was discontinued for African players after the European Ballon d’Or – also awarded by the magazine – was open to all players in the European leagues, even those of non-European origins.

Pierre Emerick Emiliano François Aubameyang was born on 18 June 1989 at Laval town in western France. He began his career with the Italian giant AC Milan when he joined youth team in January 2007. He was part of the squad that participated in the inaugural Champions Youth Cup held in Malaysia.

With his promising talent and skills, he attracted the attention of scouts internationally and was awarded a Trophy for being the top scorer of the competition.

In the season 2008-09, he was loaned to the French Dijon FCO to gain more first team experience. He then moved to Lille club on loan the following season before he was loaned again to FC Monaco.

Six months later, he was loaned to Saint-Etienne, where he truly began displaying his talent, having managed to score 31 goals in 61 games and leading the club to win the Coupe de la Ligue.

Being described as versatile attacker, capable of playing in any position up front and mastering set-pieces, as well as his good ball control, dribbling ability, and outstanding acceleration speed encouraged German giants Brussia Dortmund to approach him and win his signing in July 2013.

He became the first Gabonese player to appear in the Bundesliga and finished his first year with 16 goals in all competitions. He managed to lead Dortmund to win the German cup twice, once in 2012-2013, scoring 47 goals in 82 games. Internationally, he won with the Gabon national team, scoring 19 goals in 47 games.