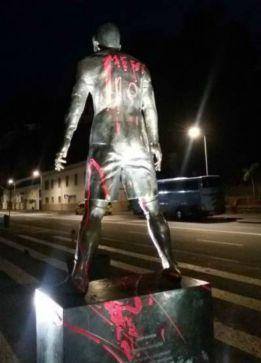 In a strange incident in top Real Madrid player Crsitiano Ronaldo’s hometown of Madeira in Portugal, a statue of the player was found tampered with, with “Messi” and the number “10” (Lionel Messi’s number) spray painted on it in red.

The incident came just two days after the announcement of Argentinean FC Barcelona star Lionel Messi, Ronaldo’s biggest rival, as the best player in the world for the fifth time.

The statue is located in the Plaza del Mar in Funchal and was a gift given from the Madeira regional government to Ronaldo for his contribution to Portugal and to world football. It bears the inscription “Best player in the world” on it.

In response to the incident, Ronaldo’s sister Katia Aviero commented: “This is a disgraceful act of vandalism in itself but just shows the levels of jealousy that exist. As a Portuguese citizen it embarrasses and saddens me. This island is clearly still inhabited by savages who have no respect and don’t know how to live in a respectable society.”

Madeira regional government ordered a prompt cleanup operation to remove the paint and restore the statue to its previous condition.

Opinion: Lionel Messi weighed down by the burden of a nation

Cristiano Ronaldo: ‘I’m not a god to please everyone!’