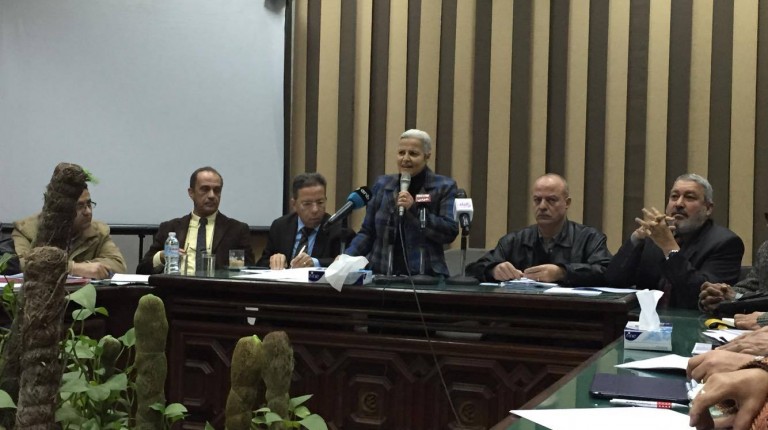 In a press conference on Monday, the Doctors’ Syndicate reiterated its call to amend the newly drafted health insurance bill after it received a modified copy Sunday night from the Ministry of Health.

The syndicate joined forces with 74 other general and independent syndicates and gained support in its call from seven political parties. The conference brought together representatives from multiple syndicates across Egypt and an array of members from the Doctors Syndicate.

The syndicate addressed those issues which they described as cornerstones in the bill and should be amended before parliamentary review. Those issues are related to funding sources and the quality of public hospitals, in addition to the identity of other institutions expected to supervise the bill.

The chief of the Doctors’ Syndicate, Mona Mina, said during the conference the syndicate has always called for a comprehensive health insurance system but the presented bill failed to accomplish this goal.

“Before the ministry selects qualified hospitals for the new system, we recommend it is obliged to ensure the public hospitals’ capacity and quality in the first place,” she said.

Egypt has about 550 hospitals and at least 5,000 medical units. Mina contends that those hospitals should still be used as they were built with the money of the Egyptian people and should be left to fall into dereliction now.

Only hospitals that have qualified doctors who earn high salaries, have high-quality infrastructure, and high-quality equipment will be included in the insurance system, according to Minister of Health Ahmed Emad El-Din.

Only 33 beds are available for every 10,000 citizens in Cairo’s hospitals, according to a factsheet issued on Egypt’s health conditions in June.

“The low quality of public hospitals is not something fatal, it is related to the simplest of things in management such as the salaries of workers and trash collectors and it is up to the government to fix it,” Mina said.

“We suggest it includes anyone who receives a monthly salary lower than the minimum wage,” she said.

Linking the service provided to the subscriptions provided is one of the key concerns. Those subscriptions are a percentage allocated from the employees’ monthly salaries to cover the medical treatment expenses. Rather according to the syndicate’s suggestions, the subscriptions should be identified among all segments equally and not linked to those who pay more subscriptions.

The syndicate criticised the bill’s exemption of mental diseases from its coverage, referring to the constitutional article which ensures adequate healthcare for all segments of the Egyptian society.

According to Mina, the new version of the bill they received said the new system will be based on an actuarial study that dates back to 2007. The ministry told them there is not a single actuarial expert in health sector in Egypt. The aforementioned study was created under the cabinet of ousted President Hosni Mubarak.

“Between 40% and 42% of Egyptians are in need of this medical insurance coverage and the state will cover their treatment expenses through this law,” Emad El-Din previously said.