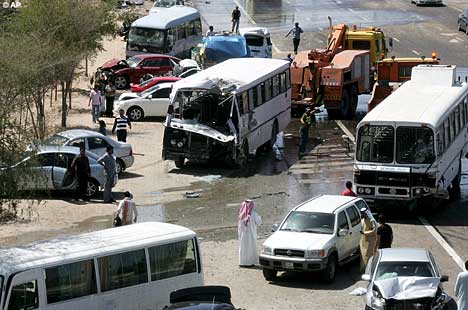 Three people died and 54 were injured in four road accidents due to the bad weather Egypt witnessed on Monday, Ministry of Health Spokesperson Khaled Magahed announced in a statement Tuesday.

Three people were killed when a bus crashed into a microbus on the Egypt-Alexandria Desert Road. In the same accident, 30 people were injured and sent to Wadi Natrun Central Hospital.

Twelve left the hospital immediately after receiving the required treatment, while three left upon personal requests, and 14 people remain there.

The second accident took place in the Giza governorate, where 15 people were injured when a microbus flipped over on the Egypt-Assiut road. The injured were sent to Wasta Central Hospital.

Magahed said the third accident took place in the Minya governorate, when a car crashed into a microbus on the Agricultural Road, leaving seven people injured, who were sent to Minya General Hospital.

The fourth accident occurred on the Matrouh-Saloum International Road, when a car flipped over and injured two people.