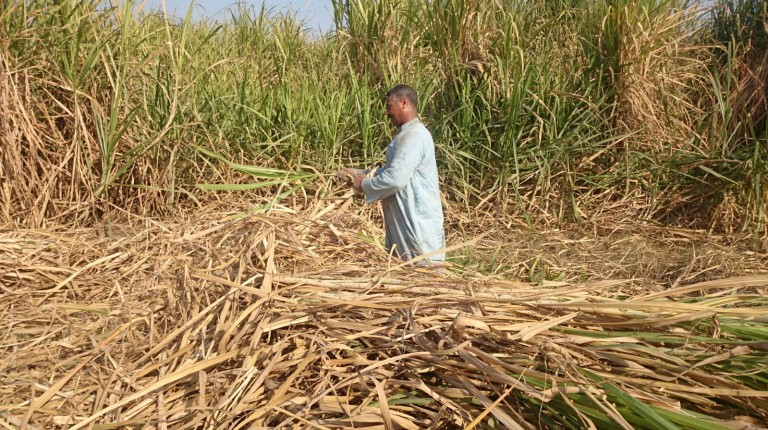 Farmers wait for January every year, which marks the harvest season, to supply their sugar cane crop to sugar factories to reap the fruits of their labour. But the return often does not cover cultivation costs. Egypt’s production of sugar is approximately 2.4m tonnes annually and consumption is approximately 3m tonnes.
This means there is a 500,000 to 600,000 tonne gap; however, the amount of imported sugar far exceeds 1m tonnes. Thus, Egyptian factories’ production is often accumulated in the stores.
The Ministry of Supply has delayed the payment of its dues to the sugar factories, which in turn caused a delay in paying the factory workers and farmers.

The Egyptian Sugar and Integrated Industries Company (ESIIC) buys its sugar cane from farmers at very low prices and afterwards, they raise the prices of minerals, gas, and benzene, a farmer in Nagaa Hamadi in the governorate of Qena, Mahmoud Labib, said.

The irrigation process is undertaken with the use of machines and that tractors are operated with gas and that the cultivation process has become expensive but the sugarcane is sold very cheaply, he said.

“It does not yield production and people sell the lands, farmers are dying,” Labib said. “Labourers are working for EGP 50 and 60 EGP per day and they leave and do not come back. I cannot find labourers and we were really lost.”

“Sugar cane is not a crop anymore; it has become a burden on us. They import sugar from abroad while our sugar is left in the company,” he said.

He pointed out that last year, ESIIC did not pay them from January until October and then only paid farmers part of their dues. Due to the lack of funds, the company paid only 30% of each of the farmers’ dues.

“The price of a sack of fertiliser can be EGP 160 in some seasons and is sold for EGP 200 oin the black market. One acre of sugar cane consumes 12 sacks of chemical fertilisers. Farmers have to buy it on the black market to save the land from desertification,” Korashi said.

“In the case of the unavailability of the required quantities of the chemical fertilisers, the Principal Bank for Development and Agricultural Credit (PBDAC) provides one-third of the quantity only.”

Korashi said the returns from cultivating one acre amounted to EGP 62,000 last season, which was the largest return per acre over the past years compared to EGP 25,000 per acre in other seasons.

He highlighted the non-availability of seeds and that the current seeds are weak due to over-cultivation. PBDAC does not provide any seeds for sugar cane, only chemical fertilisers.

EGP 400 for one tonne is not enough
Khaled Mohey El-Din, another farmer, said the sugar cane crop costs a lot now, beginning with the process of planting it. He further noted the unavailability of labourers or minerals.

Mohey El-Din said the company buys one tonne for EGP 400 but it is insufficient for the farmer. He said the minimum cost per tonne is EGP 500 or EGP 600.

Minister of Supply Khaled Hanafy said the ministry is working on developing the production of ESIIC through the establishment of a trademark. This trademark is currently being negotiated with private sector companies.

In the framework of the efforts exerted to develop the sugar industry in Egypt, the ministry negotiated with a major global Chinese company to build three factories in Egypt to produce paper from sugar cane leftovers, with a production capacity of 100 tonnes per day for each plant, with investments at EGP 1bn, according to the minister.

The minister noted that the Chinese company will be responsible for providing the full value of the investments, in addition to the three factories built for packaging, according the latest quality standards, and with the capacity of 2,000 tonnes of sugar per day.

Ayoub added that Egypt’s consumption is approximately 3m tonnes. This means there is a gap of 0.5m to 0.6m tonnes. However, the value of imports was much higher than this.

“We heard there is a surplus in Egypt that can last until the end of 2017,” Ayoub said. “In 2015/2016, the farmers’ dues were delayed: they got their money late and they were upset but they are respectful people.”

Ayoub therefore called on the Ministry of Supply to pay factories their complete dues to be able to give the workers their salaries, adding that workers receive their salaries regularly, but profits were delayed this year.

Head of the syndicate committee for workers of ESIIC in Nagaa Hammadi Rady Farag said the company has 10,654 tonnes of brown sugar, and the total amounts in the storehouse are currently at 34,154 tonnes.

“We warn of this dangerous phenomenon. Either completely stop importing or raise customs on the sugar entering the country to protect the national industry,” Farag said.

From his part, chief farmers and agricultural producers Farid Wasel said sugar cultivation is facing many problems in Egypt, after the rise in the volume of sugar imports to 2m tonnes.

Wasel blamed the Minister of Supply Khaled Hanafy for his decision to stop buying Egyptian sugar and instead depend on imports from abroad, which caused the accumulation of 1.2m tonnes of sugar in factories, and prevented the purchase of sugar cane from farmers.

The total size of sugar-cultivated lands amounted to 275,000 acres nationwide, and about 235,000 acres are supplied to ESIIC. One acre produces 43 kg annually, according to ESIIC data.

Egypt’s sugar imports were the largest in 2012, amounting EGP 4.775bn, for EGP 933m, according to the General Authority of Export and Import Control (GOEIC).

PBDAC is best placed to achieve financial inclusion as it reaches 50% of Egyptians: chairperson

Logistic centres to be set up for agricultural crops in governorates: Supply minister