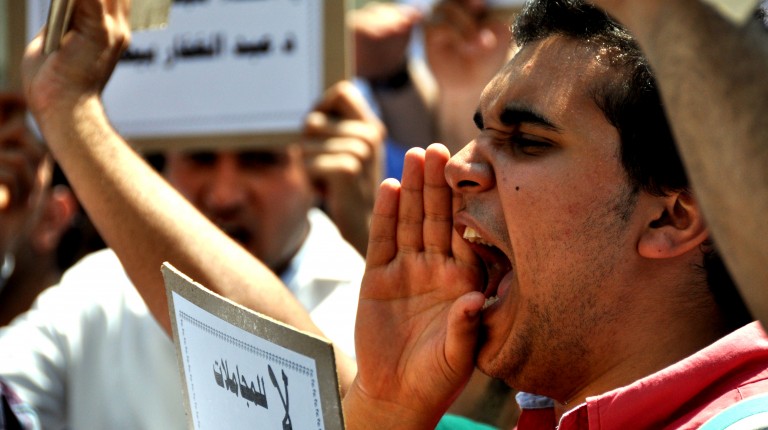 The sit-in lasted for more than a week, with some of the workers succeeding in receiving their salaries.

Workers at the Egypt Natural Gas Holding Company (EGAS) staged a strike protesting increased discrimination in internal regulations between workers with intermediate degrees and others with higher education. The protest turned into a sit-in at the company’s branches across the country, and after failed meetings with officials, turned into general strike in all the company’s branches. After rounds of negotiations, the work cycle continued with temporary bonuses issued to the striking workers.

Dozens of workers in the North Sinai based Al-Arish Cement factory demonstrated due to the lack of medical services after their colleague was seriously injured in the leg. As the workers escalated their demonstration in front of the management’s caravans, an army APC stormed into the factory with an army soldier allegedly opening fire on the workers, killing one and injuring several others, as reported by the workers.

One worker died from a fatal shot to the neck, while one of the injured was shot in the leg.

According to the military, the deceased worker was injured at the factory and was rushed to the hospital, along with three other colleagues, when militants purportedly fired at them.

Hundreds of workers in the Suez-based Misr-Iran factory demonstrated against the management’s statements about the factory’s losses, which were pushing for the factory to be closed. The workers began protesting in front of the company in the governorate of Suez in June, and continued through December, rejecting the management’s decision to give 2,000 workers an “open ended vacation”. The crisis began after the company’s assets in banks were frozen, which resulted in a shortage of raw material in the factory. Despite attempts by former prime minister Ibrahim Mehleb to resolve the issue, the difficulties facing the workers remain.

Workers at the Ministry of Religious Endowments staged a protest demanding more economic rights, including “health and social insurance”. They have been calling on the ministry to grant them the right to be included on the ministry’s insurance lists since 2011. Almost 600 workers in Giza are escalating the issue in different courts and the country’s State Council. To date, the workers’ issues have not been resolved, with the ministry ignoring their demands.

At least 2,000 state employees from the Customs and Tax Authorities held a demonstration in front of the Press Syndicate in downtown Cairo, protesting the newly issued Civil Service Law.

They demanded the “ouster of the Minister of Finance, [an end to] implementing the new law until a new committee is formed and a replacement is found, as well as granting the Tax Authority its independence”. They also chanted for the independence of the Tax Authority, demanding to be an independent body and to have syndicates and committees to regulate affairs. Other demands included the “application of the minimum wage” and “countering corruption”.

While state officials claim the law aims to reform the administrative apparatus, whilst also fixing appointment and wage issues in governmental institutions, the employees accuse them of giving more power to managers over workers. For example, article 27 of the decree states that if two consecutive annual reports show a worker is “inefficient”, he or she is to be suspended from work while maintaining their “right to a pension”.

However, the employees halted all action for days due to the anniversary of the dispersal of the Islamist Rabaa Al-Adaweya sit-in, and later resumed demonstrations in Fustat Park in Cairo, which was the first day of escalation.

Despite heavy police presence and diverted media attention, due to the announcement of the resignation of the cabinet, the demonstration was attended by hundreds, who repeated chants against the law.

Thousands of workers at the Holding Company for Spinning and Weaving in Mahalla in Gharbeya held a general strike, demanding the issuance of a 10% bonus and the return of suspended workers, who were accused of inciting workers to strike. The workers stopped production until the company agreed to issue the bonus, after heavy pressure from the government and the Ministry of Interior. Nine workers were suspended on charges of inciting their fellow workers to strike, but later returned to their posts.

Around 4,000 workers from the Nagaa Hammadi Aluminium Complex staged a strike for a week, amid official negligence, demanding the issuance of 12 months worth of late bonuses, as well as the dismissal of the higher management and the government-appointed syndicate. The demonstration evolved into a sit-in, with the workers condemning the lack of attention by the government officials, pointing fingers at the Minister of Immigration, and Prime Minister Sherif Ismail.

For almost two months, workers at the Petrotrade Company have launched a strike in response to the disbursal of additional bonuses to all managers and their favoured employees in their “inner circle”, while bonuses were denied to the wider workforce.

The strike has spread to all branches, country-wide, with the exception of Mahallah and Al-Arish. More than 100 workers have been suspended, after being accused of embezzlement and inciting workers to strike. The workers cited a marked disparity in the wages between workers and the management, adding that there are two salary regulations in the company: one applied to the mangers and another applied to the other workers.

Several leading figures in the company’s management were ousted and new managers were appointed. However, the workers have rejected the “replacement of the old guard with the old guard”, vowing to continue the strike.