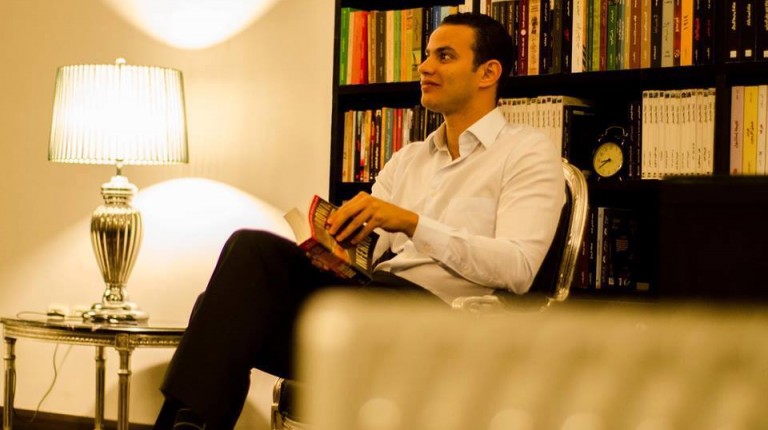 Known for his remarkable novels that mix the genres of thriller, crime, revenge, and romance, young novelist Mohammed Magdy released his third novel “Qolob Modada Lel Rosas” (Bullet-Proof Hearts) a few days ago, which was inspired by the events during World War II. The novel follows the lives of two main characters, who are on a continuous search for their lost love, and in confrontation with their past mistakes.

The book was conceived in January 2015, while Magdy was reading an article about World War II, in which the writers were discussing many hidden incidents and secrets that were not revealed until recently. ‘’This made me start to think; as long as there are secrets, there must be many hidden truths, and if there are hidden truths, that means we have to question everything they told us about this war,” he said.

“What if the Nazis did not lose the war and they made a deal to survive; what if Hitler did not really die as they claimed; what does El Alamein City hold inside its deserts? There are many questions that our main character, Youssef, has to go and find answers for,’’ Magdy said.

To shed light on the historical incidents within the novel’s plots, Magdy went through many stages of preparation that ranged from undertaking extensive research on World War II and the battle of El Alamein, to visiting the city himself to obtain a realistic vision and accurate information. He studied the city’s geography and visited the graves of the German and Italian soldiers, whose bodies were buried there.

Although the writing process took only eight months, the young writer spent more than six months prior searching for the historical information, drawing up the main characters, and arranging the sequences in a manner that would pique the readers’ curiosity and motivation to continue reading.

Although the novel blends the genres of thriller with historical fiction, Magdy could not relinquish the romantic storyline, which has been a feature of all of his previous literary works. “The novel tells the story of two different people who meet by coincidence. The first is Youssef, a young man who leaves his family because of the political conflicts between them and travels to El Alamein City to live there. After a few months, he meets a beautiful Tunisian girl named Dalida, with whom he falls in love. But when she suddenly disappears, he starts a journey searching for the unknown,” he said. The second main character is Zeina, a young woman who is about to marry the love of her life but he dies in a car accident on their wedding night. She ends up in a coma from the accident and when wakes up after three years, she goes on a search for her fiancé’s killers.

Magdy’s previous novels, “All the Bad Things” and “Inside the Glass Room”, drew attention to his unique ideas and writing style. However, he believes his new novel will be a turning point in his career. “Every novel leaves its own mark, but this one is the closest to my heart because of two main reasons,” he said. “First of all, the research I had to conduct about World War II, the Nazis, El Alamein City, and the great effort I had to exert to acquire medical knowledge about people who wake up from comas.”

“Secondly, I found myself inside this novel because the main character, Youssef, resembles me in different aspects. His personality is very close to mine; he insisted on challenging his family, and searched for his lost love. These are dilemmas I am facing in my real life, and thus I wanted express the psychological pain anyone in my place would feel,” he said.

On the cover of the novel, “Meine Ehre Heißt Treue” (My honour is my loyalty) is written, a quote by Heinrich Himmler, the director of the Nazi Germany’s intelligence, who spoke the words to his soldiers during World War II after they rescued Adolf Hitler from a coup.

Magdy however was afraid of people’s feedback about this novel in Egypt. “The only difficulty I encountered while writing this novel is the way I reshaped history; I added real life situations that occurred during the war, and then I imagined my own ending,” he said.

”My only fear is that some people will not accept the idea here and may accuse me of distorting history, although many famous authors, such as Dan Brown and Steig Larsson, tweaked historical facts for their stories in their novels and used their imagination to tell stories based on real events.”

To exploit the success of his first novel “Inside the Glass Room”, Magdy hopes to issue a sequel. “This time, I’m going to make the people who confess their guilt a group of politicians or members of a royal family, through which we can tackle the issues of guilt, accountability, and punishment from a wider and different angle,’’ he said.

Group of young actors turn controversial novel into a play