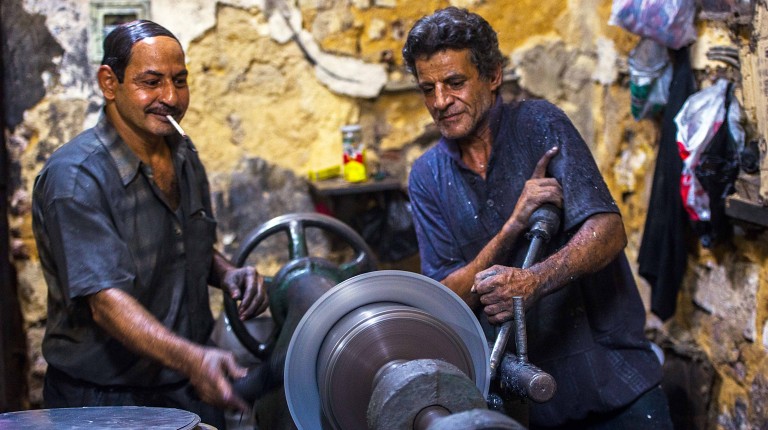 Following the 2015 Labour Day celebrations with the government-sponsored Egyptian Trade Union Federation (ETUF), President Abdel Fattah Al-Sisi received a ‘code of conduct’ from the federation, one that encourages “dialogue with the government and business owners as a mechanism to achieve social justice”.

Despite the code, 2015 witnessed 1,117 labour strikes, according to Democracy Index, showing that both the agreements of the code and the attempts of “achieving social justice” were not honoured.

Egypt’s president and the government had to go face to face with the frustrated workers who have continued to threaten a new wave of strikes and protests, if demands – which continue to be economic and social in nature – are not met.

Having staged a crippling strike in 2008, which was one of the main factors leading up to the 2011 ouster of Mubarak, Egypt’s workers remain a defiant force of opposition to the state. The regime has so far failed to gain the support of the workers.

Whether it is physical or legal, challenges to labour mobilisation and syndicate work have been increasing, putting working class activists under threat.

Daily News Egypt surveyed the opinions of workers in different fields about the main challenges the labour movement faces.

As established by the precedent set by Egypt’s High Administrative Court last April, workers are currently forbidden from striking, and if found to have been involved, can be recommended for early retirement.  The court defined “striking” as any act of gathering by the workers, through which they halt all of the production process, while still being part of the workforce of the company or the institution.

The court based its verdict on Islamic jurisprudence and the concept of benefit, arguing that if striking will harm the “clients of the institution”, it is not applicable within Islamic Sharia law.

The decision so far has not been enforced en mass, but workers fear it can be used as a pressure tool to end strikes or dismiss “workers for calling for rights”.

According to an ETUF spokesperson, the decision was used once, when a total of 152 garbage collectors, drivers, and supervisors were referred to disciplinary committees last June after being charged with holding strikes.

The administrative prosecution said the workers violated the laws, as they “went on a strike for three days”, and described striking as a “crime”. The disciplinary measures, according to the prosecution, should act as a warning to the workers so as not to strike in the future.

A new version of the 2003 Civil Service Law was first discussed in December 2014, modified in March, and approved by the cabinet early July. The new law sparked doubts among civil servants, while officials claim it will not affect any workers. However, the General Syndicate for Finance and Tax Workers said the new law overlooks most of customs and tax workers’ rights by depriving them from promotions, incentives, and freedom of expressing their opinions against the current system.

The new law has also cancelled the financial compensation for vacation days, except if the vacation request is not approved by the administration. Moreover, it has banned the promotion of any employee on an unpaid vacation.

The law has yet to be approved by the parliament

The Mineral Resources Law which was issued by the Abdel Fattah Al-Sisi in September 2014, entails allocating a maximum of 25% of total rent revenues from mines and quarries to develop the governorates in which they are located. It also provides for a portion of mine and quarry rental profits to be directed toward community development. Workers see such a law as an attempt “to allow the government to have a share in the profits of the quarries”. Sabry Taha, head of the committee to help quarries worker in Minya, said some articles in the law are “difficult to be implemented in real life”, as the total production of the quarries contains only 60% of the sold products.

As a result, around 2,000 quarries have been closed, which led to the suspension of 45,000 workers. The decision came after former Minister of Local Development Adel Labib decided to refer all illegal quarries to the General Prosecution, and for the machinery to be confiscated.

Thousands of workers from the city benefit from the quarry business, acting as workers or drivers. With an average daily wage of about EGP 50, working conditions in the quarries are poor, as most of the labourers are working illegally. The chance to sustain an injury from the work is also high, due to “unsafe equipment”.

This law has been passed and approved by the current parliament.

For unlicensed workers, participation in a strike is considered political protest, which is outlawed by the controversial Protest Law. The law was passed in November 2013 under the leadership of then-interim president Adly Mansour.

The law bans protests without police authorisation and three days in advance of a planned protest. It also gives security forces the right to bar any public gathering of more than 10 people. Since the law was adopted, hundreds of young people have been detained and the occurrence of protests has considerably diminished.

For workers, to protest outside the place of labour can be a threat, if not lethal, as police might use weapons to disperse the protest.

The law allows security forces “dressed in uniform” to disperse a public assembly if any of the participants commit a crime punishable by law or a “non-peaceful act”. Security forces are also allowed to arrest the perpetrators.

While dispersing the public assembly, security forces should begin by calling on participants to leave the assembly and provide them with safe exits. Should the participants fail to comply, security forces can begin using water cannons, batons, and teargas. If the aforementioned proves fruitless, security forces have the right to “gradual use of force” where they see fit; including firing warning shots or sound bombs, rubber bullets, or birdshots.