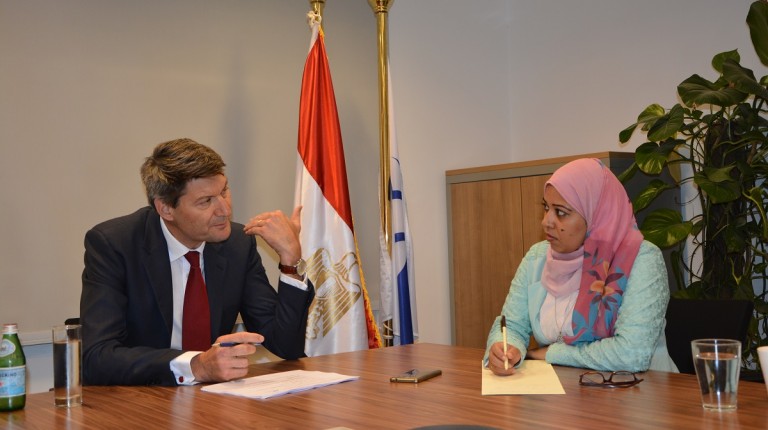 In an interview with Daily News Egypt, the Egypt country Director for the European Bank for Reconstruction and Development (EBRD), Philip ter Woort, talks about the bank’s vision and strategy for Egypt in 2016.

What is your opinion regarding the recent reforms taken by the Egyptian government?

Since mid-2014, the Egyptian government has taken important steps and has made impressive progress to reform the economy. It is important that these reforms continue allowing the levels of subsidies on fuel and electricity to disappear in the next four years.

This is important for the fiscal budget since it can free up funds for other important areas, such as public health and education.

How much is the fund grant by the bank thus far and will it increase the fund in 2016?

Firstly, EBRD provides direct debt or equity financing to Egyptian SMEs that will be announced in 2016. Secondly, EBRD works closely with Egyptian banks through their geographical distribution to reach SMEs all across Egypt.

Since the beginning of our activities, we granted $260m SME’s credit line to four Egyptian local commercial banks: NBE, QNB, NBK, and Bank Audi. In addition to these SME loans, EBRD, with NBE, developed two innovative new credit lines to be on-lend via NBE to SMEs. A $20m loan focussed on women-led businesses and the second was a $30m loan to energy efficiency investments in SMEs.

Thirdly, through our successful Small Business Support platform, we provided direct technical support to about 300 SMEs, including 50 women led businesses. We aim for 2016 to further increase our support for SMEs through all these three platforms.

What is the fund allocated by the bank to new solar energy programmes and projects? How many projects is the bank involved in and how many companies request fund?
The bank, jointly with AFD, is sponsoring a €1.5m project under the MED 5P programme to provide transaction advisory services to EETC to structure and implement a tender for a 200MW solar photovoltaic plant in Kom Ombo in Upper Egypt.

The bank is also supporting the longer-term development by providing over €2m of TC funding for a strategic environmental and social assessment east of the Nile for the next phase after fully utilising Gulf El Zeyt and Benban.

EBRD received a preliminary approval to finance up to $500m solar photovoltaic projects in 2016 under the current feed-in-tariff programme.

What is the size of the bank’s portfolio dedicated to Egypt? Will you raise it in the upcoming period? If so, how much is the expected increase?
Our activities have grown steadily with investments in 2015 of €700m compared to €575m in 2014. We hope to continue further in 2016 and increase the business volume even more.

What are the main challenges in the informal sector for Egyptian firms?
Electing a new parliament fulfilled the last step of the political roadmap, which will further contribute to the political stability.

The bank is working with the authorities to further improve Egypt’s public procurement laws and regulations to reduce corruption and facilitate an open and transparent procurement process. The informal sector is indeed a challenge for private sector development since it creates an unequal playing field.

What are the latest developments in promoting the Egyptian market in other foreign countries?
The bank participated in a mission led by the Egyptian Federation of Industries to the Netherlands to raising Egypt’s investment profile in Holland.

EBRD also organised a business seminar in Taiwan in September 2015 and gave a presentation about investment opportunities in Egypt. Moreover the bank organised its first ever SEMED Business Forum in November 2016 in Sikhirat, Morocco. It allowed EBRD Southern Eastern Mediterranean countries—Morocco, Tunisia, Jordan, and Egypt—to present themselves to international investors.

Are there any deals with the government that we will hear about in the upcoming period?

The bank expressed its interest to support the government for efficient irrigation programmes, an important sector under Egypt’s water scarcity and demographics.

We are negotiating with the authorities and our co-financier IFC to finance the Abu Rawash PPP Water Sanitation Plant.

What are the bank’s main features of the strategic plan in 2016?
The bank is currently developing its first strategy for Egypt. It will rely on the opinions and recommendations of all stakeholders.
A delegation of EBRD will visit Egypt in 2016 to learn more about the challenges facing Egypt to tailor EBRD’s strategy that will be ready at the end of 2016.