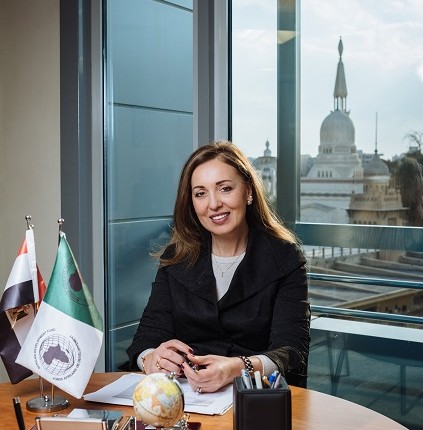 Daily News Egypt interviewed Leila Mokaddem Resident Representative Egypt Field Office at African Development Bank (AfDB) to talk about the bank’s business in 2016 and its vision regarding the economic reforms taken by the Egyptian government.

Has AfDB instituted new conditions that the Egyptian government must meet to acquire loans in 2016?

AfDB has a privileged partnership with the Government of Egypt (GoE), its second largest regional shareholder and third client in terms of cumulative historical approvals. However after a lending hiatus of several years, the bank is now able to fully reengage with Egypt.

Nonetheless the bank needs to carefully manage the issue of headroom. This calls for a new reengagement format through which the Bank should seek to increase its exposure to non-sovereign operations and mobilise additional resources through trust funds, The Africa Growing together fund, the Clean energy funds, and through co-financing with other partners.

Besides the loan for the budget, will AfDB finance any other development projects?

Specific indicative lending projects for 2016 in the bank’s Country Strategy Paper (CSP) include the lining of the Nubaria and Ismailia Canals, the construction of a 200 MW wind farm in Gulf of Suez (private sector project), and the construction of the Damanhour power plant.  Additionally, AfDB will finance three private sector projects, two of which are in the renewable energy sector and Economic Governance and Energy Support Programme.

Moreover, specific indicative grants for 2016 in the bank’s CSP include transport sector interconnectivity in Egypt, institutional support to GAFI to set up a centre of excellence to promote intra-Africa trade, a feasibility study, and the ESIA Abou Rawash Sludge facility. AfdB will also fund a study on best practices on skills development and provide a supplementary grant for the National Drainage Project

What are the details of the partnership agreement between the bank and Egypt?

Specifically, during the recently approved 2015 19 Country Strategy Paper (CSP), which highlights the core priority areas of AfDB in the coming years, will be focusing on two operational pillars. First is infrastructure (for private sector competitiveness and sustainable and inclusive growth); and governance (for enhanced transparency, efficiency and fairness and increased private sector participation). This will be implemented through public and private sector loans, programme based operations (budget support), grants and economic and sector work (ESW).

What is your vision regarding energy subsidies and tax system in Egypt in 2016?

To boost growth and reduce the subsidy bill, the GoE adopted a holistic approach to reform the energy sector, which has been a drag on the economy. The Government’s comprehensive plan focuses on energy pricing, subsidy reforms, regulatory and changes within governance of the energy, oil and gas sectors. The GoE is using savings from the energy subsidy reform to launch targeted social safety nets to shield the neediest from the adverse effects of these reforms.

Based on the above, we are hopeful that there will be a reduction of energy subsidies as a proportion of GDP from 6.6% in FY2014 to 3.3% in FY2016. The target for FY2018 will be confirmed during subsequent policy and lending discussions, and economic performance.

Regarding the tax system, the GoE and bank are keen to increase tax revenues as one of the key measures to help address the fiscal deficit along with expenditure management. Tax revenues in FY2015/2016 registered a 33% increase than what was expected in FY2014/2015. The most important tax reforms expected in FY2015/2016 include a shift to the VAT system, which should yield extra revenues. The bank will continue to support the GoE wherever necessary to strengthen the fiscal position, including through ESW Studies.

What are the economic promises made by the Egyptian government to the bank?

Through the Economic Governance and Energy program, which is planned for three fiscal years (2015/2016 – 2017/2018), the AfDB will support the government in its reform efforts which are aimed at advancing fiscal consolidation through revenue enhancement measures, and measures to contain the wage bill. Besides, ensuring energy security through improved governance in power and gas sectors, reforms of subsidies and enhancing the business environment by improving the environment for investment and industrial growth. Further, fostering open competition, transparency, good regulatory governance, and financial inclusion will be important.

What is the bank’s role in PPP projects?

The bank has so far provided support to PPPs in the form of studies, which it did, for example, with the Helwan wastewater treatment plant. It has also helped to set up a regional hub for PPPs in North Africa to provide technical support to the government.. By the end of October 2015, the GoE had tendered 5 PPP projects out of 7 planned in 2015 and 2 were expected to be tendered before the end of the year.

The business of wastewater