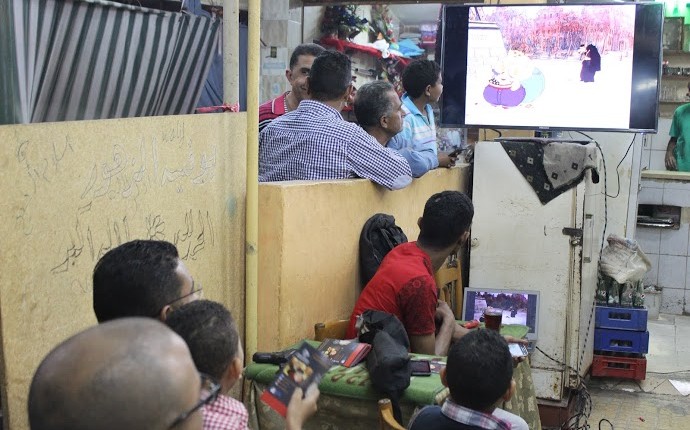 In 2015, the filmmaking industry was fighting for higher financial income even at the price of producing poor, unqualified, and off-colour humour movies. There was a domination of violence and sex in most Egyptian commercial films at a time in which another type of cinema industry was battling hard to be seen and heard.

Independent movies are rarely found screening at cinemas and media portals in Egypt, even though they lately started becoming more popular. Films are produced, shot, and directed but, unrelated to famous production companies artists, they are neglected by Egyptian mainstream cinemas.

These independent movies are usually more creative, tackling sensitive topics differently, with storytelling and usually have lower budgets since they do not require a huge crew or studios.

Independent cinema has gained greater prominence among Egyptian audiences recently. And in 2015, Independent Egyptian films were feature in international film festivals and received many awards.

Um Ghayeb (Mother of the Unborn) is one recent Egyptian movie in the world of independent cinema. The film tells the story of a woman from Tanta, Upper Egypt who has been married for 12 years without any children. In 95 minutes, director Nadine Salib features what it is like to be married with no kids in one of the smallest villages on the country side of Egypt.

The women does not want anything else in her life but to be called mother but the locals treat her as if she failed her mission as a wife. She waits every month to see if she has become pregnant.

For three years, the small movie staff worked with the main character, Hanan, to come up with an output that reflects another, unseen part of Egyptian society in a natural way. Om Ghayeb participated in many international film festivals and received awards such as the Fédération Internationale de la Presse Cinématographique International (FIPRESCI) and the Best Documentary at the Abu Dhabi Film Festival.

Locally the film was screened only once in Egypt at Zawya for a week.

Bara fe El-Share (Outside on the Street) is another independent film that was produced in 2015 by directors Jasmina Metwaly and Philip Rizk. In 72 minutes, the film showed the workers’ life conditions before the 25 of January Revolution and the reasons that led to the revolution.

It won the Best Feature Film Award at the 5th Latin-Arab International Film Festival (Festival Internacional De Cine Latino Árabe) in Buenos Aires and it was firstly screened within the official selection of the 26th edition of the Carthage Film Festival in Tunisia. The film was also featured at the German Pavilion at the Venice Biennale. However the film just started screening at Zawya on 10 January.

Fe Youm (In a Day) is an independent film that was produced and directed by Karim Shaaban with photography director Habby Khalil.

Through different six characters, the film tells the secret stories people share only with themselves when they talk with themselves. Seeking a more descent life is the one constant element between all six characters, who lost their hope, dignity, life, and sense of security in Egypt. With narration reflecting their inner voice, Fe Youm reveals how a person’s most silent moments might be the wildest fight within their mind.

Fi Youm was selected as Egypt’s only competing film in the Horizons of Arab Cinema competition at the 37th Cairo International Film Festival. Nevertheless the movie was not screened in any media platform in Egypt.

“There is no such thing as commercial cinema and independent cinema,” Shaaban told Egyptian Streets in an interview. “Cinema is when one decides to make a film, whether one bears the production expenses or resorts to a producer to cover it.”

But as far as public perception is concerned, “independent cinema “is perceived as the cinema which tackles issues but that is also unnecessarily deep and philosophical to the extent that the audience doesn’t understand or relate to it.”

Film Screening Portals
People have grown distant from the Independent filmmaking industry because it presents an unusual type of drama that they have not usually been watching.

In Cairo, cultural centres screen Egyptian independent movies such as the Egyptian Catholic Centre for Cinema, which organises an independent film festival annually to support talented artists that fight to deliver their message to the world.

Zawya screens independent films with reasonable tickets prices without seeking high commercial profit. Located in downtown Cairo, the space introduces internationally awarded films and sometimes offers the chance to talk with the film’s makers. It is the only media platform that screens movies for the visually impaired in Egypt.

The small cinema house is an informal embassy of local independent film makers since it is one of the very few that screens their work. ““We opt for alternative international films, as well as films from the region and from Egypt, independent films, award-winning or nominated films from international film festivals such as Cannes, Berlin, Toronto, and Sundance,” project coordinator Malak Makar told Daily News Egypt.

“We are not exposed to European cinema in Egypt enough, all cinemas show either big US blockbuster films or big production Egyptian films. European cinema has a lot to offer and needs to be accessed by the Egyptian public,” she said.

When the independent film Wild Tales was screened at Zawya, all tickets were sold out all in a very short period of time even though the film was screened five times a day for two weeks.

This indicates that when people were introduced to an alternative type of the regular films they see, they became keen on knowing more and learning more about it and that that movie genre is becoming popular in Egypt.

In Alexandria, Waguih El Laqany decided to create his own independent film screening platform to help expose unprivileged people to a new type of cinema they never even heard of before.

El Laqany named his initiative Cinema Everywhere. Ever since 2013, Waguih would take his LED screen with his laptop, full of short documentaries from all around the world, and go to local coffee shops at night to talk to people about the  different genre of films’ history and asks them to watch a couple of them, all for free.

“People have to know that there are different types of cinema than the ones we’re all forced to expose to in Egypt,” El Laqany said. “It’s either low-standards commercial films or US top hits movies, there’s nothing else people know about.”

Waguih insisted that it is not only the government’s role to provide alternative-movie cinemas to audiences and to spread that culture is the people’s duty as well. “It’s not necessarily to watch European movies; the number of Egyptian productions we have in and won many awards at international film festivals is huge,” Waguih said. “Just by watching these movies, which are available is a form of support these artists and educate ourselves as well.”

From screening different movies at NGO’s and public places for two years, Waguih insists that the majority of people accept watching a film that is not shot at a studio with a fixed ending scenario.

“Even if they’re not convinced with the story of the movie, people accept watching it and discuss its details afterwards,” he said, “To have many official underground films screening portals, you have to have large audience asking for them and this won’t happen unless we spread that culture among people first.”

After the initiative widely spread at Alexandria, the British Council supported Cinema Everywhere by providing it with modern, more qualified equipment to screen films in public. The French Institute in Egypt showed support by offering French documentaries to be screened for special needs audiences.

So far Waguih is working with the support of individuals who support the initiative themselves and some foreign cultural centers in Alexandria without legal screen permits. “Connecting to regulations means endless routine and as long as I’m achieving my mission well I have no requirements from the officials,” he said.

“The country has a problem when screening independent documentaries,” movie critic Tarek El-shenaw said. “Governmental screening platform such as Al-Hanager theatre and Innovation centre lack screening these types of movies, which affect people’s cultural awareness towards them.”

In the 1960’s, when the Ministry of Culture was controlling cinema theatres, there was a rule of screening one short documentary before each commercial one. That planted the definition of independent short movies inside of the public, which lead them to believe that documentaries are as important to watch as other movies, El-Shenawy said.