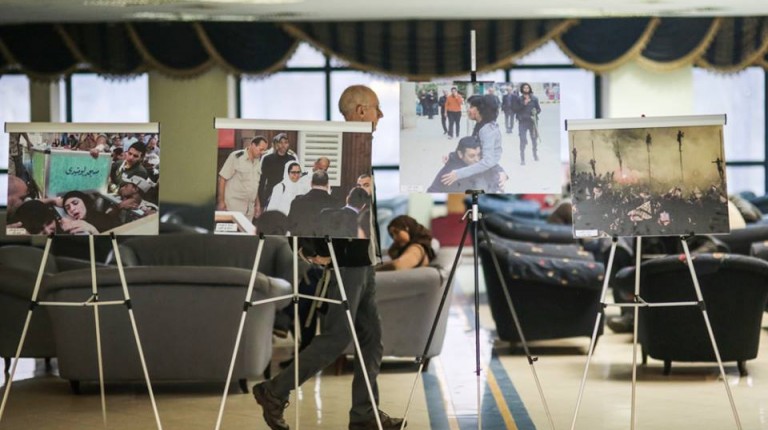 The Shawkan Photo Awards competition organised a ceremony Thursday, in coordination with the Freedoms Committee at the Press Syndicate, to distribute the awards to the winners in the competition that was held on December 2015 in honour of detained photojournalist Mahmoud Abou Zeid “Shawkan”.

During the ceremony, renowned journalist Ahmed Khair El-Deen read out a letter that was sent from Shawkan, in which Shawkan expressed his gratitude for the continuous support he receives in his detention and for all the participants in the competition.

“Photojournalists and I are not part of any political conflict, but I’m still paying the price, away from my camera,” Shawkan said in his letter.

He concluded his letter by congratulating all the winners of the competition, thanking the judges committee that chose the winning photos and everyone who supported and helped in establishing the competition.

Photojournalist at the Associated Press Amr Nabil spoke of the reasons behind establishing the competition, saying there are no real photojournalism competitions in Egypt, and “what is distinctive about this one” is that it was done in a very short period of time.

“Although the competition was online, the judges committee didn’t ignore photos that failed to grab the attention of the public,” Nabil added.

Renowned photojournalist Hossam Diab and a member in the Shawkan Photo Award judges committee said during the ceremony that the competition was very intense, and that a lot of the participating photos were expressive.

As for the conditions for participating in the competition if a second round is to be held next year, Diab said there are no restrictions whatsoever on the photos, but that they have to be newsworthy, and not of daily life. Otherwise, all photos are welcomed, he said.

Head of Freedoms Committee at the Press Syndicate Khaled El-Balshy said there is a large number of journalists and photojournalists behind bars, at least 28, 20 out of whom were arrested while doing their job as journalists, the others who had charges fabricated against them, such as belonging to outlawed groups.

He added that beside the 28 arrested journalists, six other journalists have been referred to criminal court for publishing information about the current Minister of Justice, Ahmed Al-Zind. Further, another photojournalist was arrested last week because a central security car appeared in one of his photos, but he was released shortly afterwards. However, he was targeted just because he was holding a camera, El-Balshy said.

The ceremony was concluded by distributing the awards to the winners, with photojournalist Islam Osama winning first place for his photo capturing the moment political activist Shaimaa El-Sabbagh was killed by security forces in January 2015.

Shawkan has been held in pre-trial detention for more than two years, in violation of Egypt’s penal code, which stipulates a maximum of 700 days of pre-trial detention. He was arrested in 2013 while covering the Rabaa Al-Adaweya sit-in dispersal with other journalists, who were released shortly afterwards. Shawkan however has remained in prison since, despite the numerous solidarity campaigns held on his behalf by the Press Syndicate.

Shawkan Photojournalism Award reveals the winners of its second edition