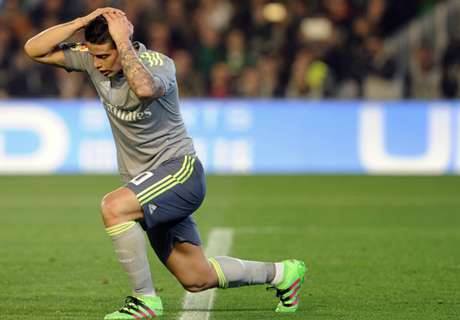 Following Real Madrid’s shocking draw (1-1) against Real Betis in round 21 of the Spanish League (La Liga), Colombian Real Madrid player James Rodriguez received a lot of criticism for his poor performance in the game.

The draw puts Real Madrid in third position in the league, with 44 points, just four points behind its two biggest rivals; Atletico Madrid and FC Barcelona.

He also commented about his recent high speed pursuit by the police: “People always speak without knowing real facts and about what really happened. I wasn’t going as fast as everyone says. I had music playing at a high volume. That’s why he couldn’t hear the sirens. I’m not stupid; if I’d seen them I would have pulled over. I apologise – people make mistakes.”

Real Madrid fans were outrages at Rodriguez’s recent performance; as they were relying on his excellent technique, vision, and skills to help win in their tough competitions. Real Madrid paid €80m to sing Rodriguez in 2014 from Monaco after his outstanding performance in the 2014 World Cup with Colombia.